Search warrants against the media

Stephen Price, a lawyer blogging on media and ethics, has a quick blog on the question of the police seeking search warrants against the media.

I’ve just stepped off the plane back from Melbourne to find that the police are following up a complaint from the Prime Minister by executing search warrants against the media in what could be seen as an attempt to prevent the publication of material that might embarrass him shortly before an election.

I’m just wondering whether I got on the right plane.

Well I can understand that. I get the feeling that whenever John Key hooks up with John Banks then a debacle usually results. Last time was the supershitty. This one feels even more like a looking glass moment. But dragging myself back to the point.

I will summarize them a bit (read the original before quibbling). My comments are in italics.

All in all, you’d have to ask what the intent of the police in seeking the search warrants is going to be. There doesn’t appear to be any point to the raids on media under the guidelines for obtaining and using a search warrant against the media. At best they might find footage of the  freelancer putting down the mike as he has already said he did. His intent is impossible to see on film. If he was daft enough to admit guilty intent in a radio interviews, that would wind up as news anyway and be available to the police. So what are they actually after? 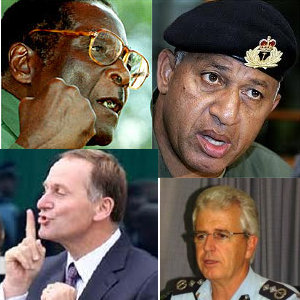 Instead from the little I have gleaned from the reports of the polices actions at RNZ today, they seem intent on shutting down the story by removing material that may offend the Prime Minister and the NAct government prior to broadcast. It remains to be seen if any search warrants would be compliant with the courts guidelines without requiring retrospective legislation passed under urgency – as has been previously tried.

Getting the search warrants and the supporting documents from the police and publishing them will make that clear. Especially once we have a look at which officer is putting the requests forward and which compliant court registrar they use. I’d love to get a copy (hint hint).

But at present I get the impression that John Key has been taking lessons from Frank Bainimarama, Robert Mugabe and other doyens of democracy in how to use the police to try and intimidate the news media.  I’m surprised the Peter Marshall puts up with it. It must remind him of the Solomons.

The cameraman in the middle of cuppagate, Bradley Ambrose, is reportedly seeking a court declaration that he committed no crime because the recording wasn’t intentional and the recorded conversation wasn’t private. (That is, that the conversation did not occur in circumstances in which any party ought reasonably to expect that the communication may be intercepted by some other person not having the express or implied consent of any party to do so.)

Some of the arguments about whether this test is satisfied have been thrashed out in the posts and threads below. I think the balance of argument is that it can’t be a private conversation. (Even those, like me, who think it might be have to concede that eliminating this element beyond reasonable doubt is a tall order).

Still, I wonder whether a judge will want to grant a declaration about issues that are squarely in the middle of an ongoing police investigation.

You do have to wonder about this. The police are trying to obtain search warrants against the media even before they have interviewed the guy. If I was him I’d be worried if the first time he got to say something was when the judge convicted him. Again pretty common in some countries and based on the behavior of some police over recent years, pretyy damn close here..

57 comments on “Search warrants against the media ”