The Government is rightfully concerned about the take up of Covid vaccines by Maori.

Recent figures suggest that in the previous week during a surge in vaccinations one in seven kiwis received a jab.  But for Maori the figure was one in 11.  The reason is set out in this article published by Stuff:

Te Rōpū Whakakaupapa Urutā co-leader Rawiri Jansen said such figures were entirely predictable as the vaccination rollout was never set up with Māori in mind.

“It works pretty good actually if you’ve got a nice big smartphone with a data plan. And it works really well when all these messages coming at us about when to get vaccinated and who’s eligible, and all of that complexity makes sense to you and the messages resonate.

“It probably works really well if you’re one of the workers who’s able to work from home, so you’re not an essential worker in grocery, stacking shelves. But your job has you at home so you can use that laptop and that data plan, and you can navigate the booking system and make a booking.

“You might even have a car with a warrant and gas in the tank, and you can actually drive to a centre. So you can look for a booking that’s available and on the day you’re good to go and get it done. Now if you don’t have those things, it’s hard.”

To address this the Government has released a special booking code for Maori Whanau out West Auckland to try and address the imbalance and to also take up some extra current capacity.

And what should the leader of a major political party, someone charged with taking a responsible attitude to the crisis do?  How many guessed publishing the code?

That is what has happened.  David Seymour tweeted out screenshots of an email containing the code to all and sundry. 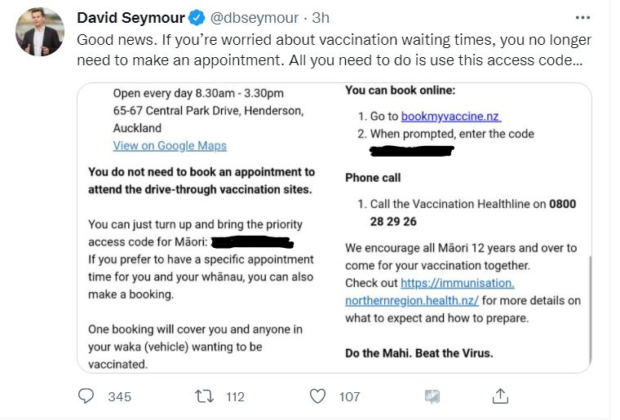 He is currently getting roasted on Twitter.  What point was he trying to make?  That Maori were receiving preferential treatment even though their vaccination rate is very slow and a threat to us all.  Let’s not mince words.  None of us are safe until we all, or a huge number of us, are vaccinated.

Debbie Ngarewa-Packer from the Maori Party has not held back and described this as cruel low level scum politiking.

She is right.  This is cheap tawdry politics.  Why am I not surprised that Seymour is involved?

81 comments on “Seymour undermines vaccine roll out for Maori ”