Stop being a dick Barry

Written By: mickysavage - Date published: 7:31 am, November 23rd, 2021 - 54 comments
Categories: jacinda ardern, Media, politicans, the praiseworthy and the pitiful, you couldn't make this shit up - Tags: 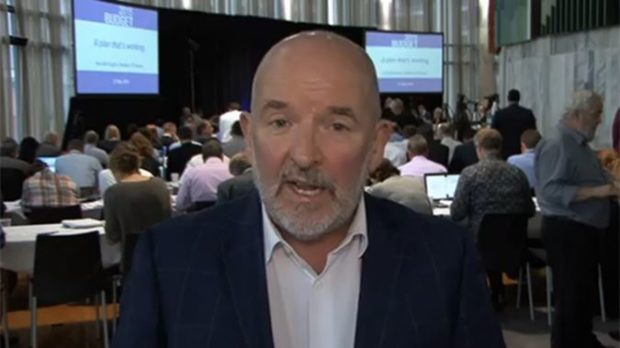 The sense of privilege is especially strong with this one.

Barry Soper was politely shut down by Jacinda Ardern during her post Cabinet Press Conference yesterday.  In front of a packed group of reporters all asking her questions she did what was utterly logical and tried to spread the questions around.

Barry Soper, a legend in his own lunchtime, then threw a big tanty and stormed out of the conference.  His justification, he had a deadline to meet and she refused to answer his questions immediately.  The leader of our country should clearly rearrange Cabinet and the handling of the country’s pressing matters so that Barry can meet his corporate imposed deadline.  Maybe Cabinet should meet at 4 am so that Barry has something ready for the morning news.

But not only did Barry get upset at Jacinda attempting to allow all media to ask her questions and then storm out of the conference but he then wrote this clusterfuck of an article to accuse Jacinda effectively of communism because she was not deferential to him.

His piece starts off by prattling on how he upset Muldoon and Lange.  I suspect that these were his best years, but they were over 30 years ago.

He then said this:

Jacinda Ardern’s press conferences are on a whole new level, she’s had more practice at them than any other leader in recent history.

But for her, it’s all about control, to cut off a line of questioning before something difficult takes hold. If it runs the risk of taking hold, she’ll over talk the questioner through the power of the podium microphone and move on.

With the flick of a hand, she’ll switch to another questioner. She’s trained the media to raise their hands which allows her to rattle off the order in which the questions are to be asked.

If you’re working to a deadline, which if you have to go on-air in radio is constant, it’s of no consequence to Ardern, television takes precedence.

Admittedly the question she flicked away on her latest outing was probably one she wasn’t too keen on taking – was she going to do more than a token visit to Auckland this Thursday?

The current crop has all been media trained like no other occupants in the Beehive. The same modus operandi has been adopted by Ardern’s fellow preachers from the pulpit – Grant Robertson and Chris Hipkins.

He has no self awareness.  Attacking her for “not visiting Auckland” is to reinforce a National attack line that has no substance.  I prefer that the Prime Minister is on top of her game, has had full briefings and is in a position to make decisions on the country’s future rather than spending huge amounts of time on photo opportunities and to witness first hand what she will already be aware of from media and social media reports.

Accusing her of “overtalking the questioner” is exactly what he was doing.

And accusing her of media control as she offers to multiple reporters the chance to question her?  How can this be evidence of control?

Some of the best and toughest questioning has come from Iwi media.  They actually get into the meat of important issues rather than ask where people in Ponsonby are going to have a piss if they cannot go inside the restaurant because the city is battling a pandemic and is still being very cautious.  But they do not have an expectation of entitlement.

It is interesting that the Herald article does not feature video of the conference.  I wonder why?

Here's the video of Barry Soper having a tantrum and storming out of the 4pm presser today. Barry had already had 3 questions when other journo's hadn't had their first yet. pic.twitter.com/1TDfO8TxzA

I have held off cancelling my Herald subscription because of the likes of Simon Wilson, Dave Fisher and Matt Nippert.  But Barry makes this so difficult …

54 comments on “Stop being a dick Barry ”