The joys of bread rising far to fast through a warm autumn night is…this post.

Under Labour’s Families Package 70% of families with kids do better than they do under National’s tax plan. Labour launched their online calculator yesterday…

It is very heartening to see Kiwis rejecting National’s tax cut bribe (and English’s arrogant debate rhetoric) – in favour of supporting each other and backing Labour’s policies for a better NZ.

As the Nats stand exposed in another apparent dirty politics hit, Labour gets on with the job of winning the election. Jacinda Ardern today announced new policy: Making tertiary education and training affordable for all.

What it says on the label.

In the wake of devastating earthquakes in Canterbury, National’s treatment of mental health needs in the region has been absolutely shameful. Yesterday Jacinda Ardern released new policy to help address the crisis. Great work from Labour in an area that National have cruelly neglected.

English’s “boot camp” policy is pure politics. As much as he tries to deny it, it’s more or less an exact repeat of Key’s failed 2008 attempt, it would do much more harm than good if ever implemented. More than any other flailing to date, this mess is a sign of National’s desperation.

“Labour’s School Leavers’ Toolkit will help students learn to drive, understand practical budgeting, be equipped with workplace skills, and learn how our political system operates through civics education at school. Every secondary school will be resourced to provide these courses.”

The parties on science

There’s an interesting piece by Peter Griffin over at Sciblogs on various parties’ positions on science in NZ. Not many Kiwis vote on the basis of science – and that’s one of our problems.

Steven Joyce wouldn’t front yesterday, but today National have worked out their attack lines.  Leave popular Jacinda alone and attack Labour as tired and lacking in new ideas (projection, much?).  Labour has a raft of new policy, to go with needed older one’s like 2013’s Kiwibuild of 100,000 affordable homes.  Journos need to learn their policy so they don’t let National’s fake news through…

National reckon public health and education are a waste of money?

According to Morning Report the Nats are calling Labour’s budget for more spending on health and education “a plan to waste more money”. Tell it to the people who can’t afford private alternatives and depend on the public systems.

Labour has just released costed details of its comprehensive plan to put $8b more over four years into health and $4b into education. Excellent.

A clear choice for voters

Herald editorial: “Credit where it is due. It takes courage to say that if elected, you will cancel a tax cut. … In doing so it has presented the voters with a clear choice which, for those without young families or earning above the income limits, will mean deciding whether to take the tax cut or give the benefit to children of the less well off.” 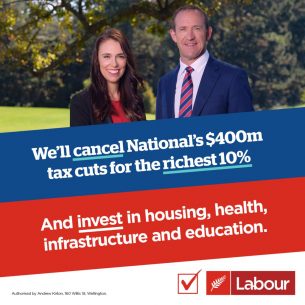 As covered by Vernon Small on Stuff: “Labour is promising to scrap National’s Budget tax cut plan. Instead it will funnel the cash into higher Working for Families payments and extra help for those with young children. It’s a package it says will deliver up to $48 a week extra to middle income families.”

In shocking news, it turns out that employers don’t like Labour’s new employment relations package. They (and the usual suspects) are running lines about a return to the 1970s. A time when workers’ share of the wealth was higher, poverty was lower, inequality was lower, and workers had more rights. Sounds awful.

National’s conference was supposed to be a tour de force, setting them up for the home stretch to the election. Instead it was empty of policy or vision, and coverage was drowned in a rising tide of Billshit.

A quite remarkable interview of Michael Fallon by Channel 4 News in the UK.

Corbyn on terrorism and UK settings.

The Greens – Budget for All Mothers

Some great ideas in The Greens “Budget for All Mothers”. Surely no “data driven” “social investment” party could be opposed?

Good piece by Andrew Little where he addresses the arguments of the property speculators. “It’s common sense. Taxpayers shouldn’t be subsidising speculators and helping them outbid home buyers.”

It must be election year, because National has admitted that the market has failed, and swallowed the dead rat of state building. A useful graphic summary in The Herald lets you compare National and Labour’s housing plans…

Labour has set the cat among the property speculator pigeons, and they don’t like it at all.

Speeches and policies from Congress so far.

Labour’s mental health policy has had a good reception, especially in contrast to National’s systematic under-funding and arrogant response to the issue. 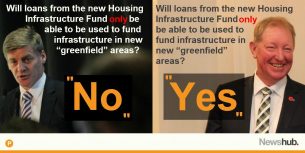