Fire in the Sky – Smoke in the city

Joe Carolyn from Unite Union has posted on the effects of the Sky Convention Centre fire on workers at Sky City.

Both One News and The Herald have pieces this morning highlighting different cases of dirty money being “filtered” through NZ. Panama papers, National donors, SkyCity and more…

That’s the Nats’ message to Auckland, who are getting a taste of some Canterbury style “democracy”.

NRT: There is too much money in our politics

Our political system is awash with money. There is clearly an arms race going on where National is trying to spend everyone else into the ground. National includes significant funding from Auckland property developers and real estate agents, and probably explains their effective disinterest in fixing Auckland housing.

SkyCity’s share price went up just before the recent Government announcement of the deal with SkyCity.  Winston Peters wonders if some insider trading was involved. 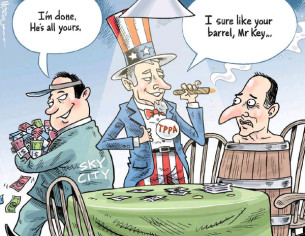 So the Nats spent $250,000 working out that an Auckland convention center needed 3500 seats to break even, and are now about to be delivered a center wtih 3000 seats.

The flaws in the process whereby SkyCity promised a free convention centre in consideration of legislative changes are now clear to see.  Through an act of brinkmanship SkyCity has embarassed the Government and caused it political damage.  And it has achieved a return for investors, the legislative changes will be the same despite there now being a smaller cheaper convention centre.

Dave Armstrong at The Dom Post has written a very funny piece on the SkyCity fiasco, and in the process coined the immortal phrase “The SkySore”.

An eyesore for Auckland

Steven Joyce has announced (because Key likes to stay clear of bad news) that SkyCity will not be seeking public funding for its convention center. So looks like it will be Key’s “eyesore”.

I/S at No Right Turn adds some detail to Matthew Hooton’s extraordinary piece at the NBR.

Say NO to the $140m SkyCity bailout 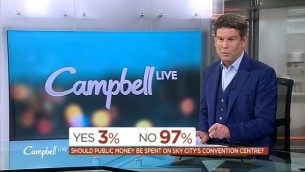 At last, some of our conservative short-term thinkers have woken up to the elephant in the room with the SkyCity convention centre subvention. Years late and their previous support has cost taxpayers dearly already. Perhaps they could learn to read reports? And think before committing us to be suckers?

Imperator Fish: Let’s hear them out

Sky City wants the taxpayer to help cover the increased cost to build its new Auckland convention centre. They agreed to build the convention centre in return for the government giving the casino a licence extension and allowing it to operate more gaming machines…. So…

Hosking, Henry, National and SkyCity – it’s all so cozy…

You’d have to ask if skycity asked the government to get rid of this turbulent critic? After all their brief is to reduce problem gambling.

A glorious waste of money for the titillation of perverts

The fiasco of the wet dick and the perverts shuddered to a conclusion yesterday with the direct bill of around $250,000. Len Brown was strong-armed into paying $40,000 for the audit which turned up nothing much except that his wife brought a lot of hotel nights. Questions remain about who was responsible for the waste caused by the lack of scoping of the external audit. Looks like dirty politics at the ratepayers expense.

The detail of the Ernest and Young report on Len Brown clears him of all significiant wrongdoing on the local government purse. The hotel room upgrade values are just complete bullshit for someone who had a regular family timeouts at one hotel – which did most of the almost all of the upgrades. The type of customer that all hotels want. The political question is about receiving anything “free” from Skycity.

It raised a few eyebrows when the Catholic Church appeared to back the SkyCity deal. Seamus Donegan appeared before the select committee for the Catholic Justice and Peace Commission, saying they couldn’t find a link between pokies and problem gambling. Turns out that Donegan’s submission was the opposite of the Commission’s real position, and he’s National MP Sam Lotu-Iiga’s electorate chair.

Imagine if cigarette makers gave out free packs to target groups to get them hooked and if you were trying to quit smoking and you had a ‘loyalty’ card with your cigarette maker then, when they noticed you had stopped making purchases, they sent you a free pack. That’s what casinos do. Freebies are used to hook people into gambling and keep them hooked. The Greens will stop them.

Yesterday, the Greens illustrated the size of the gambling concessions in the SkyCity deal with a to-scale cardboard display in Aotea Square. The visually striking move got extensive coverage on Breakfast yesterday and a rather, odd, story in the Herald, which chose to focus on the cost of the protest. What was that, presumably, outrageous cost? $3,000.

If Key and Joyce aren’t simply corrupt, then they are some of the most stupid business people I’ve ever seen. But most likely they’re just politicians trying to cover their arses for making a stupid mistake. It looks to me like they have gutted TVNZ to give a bare land deal to SkyCity, ignoring the value of the building on top or the profitable business that they will destroy in the process.

Selling our soul for 18 jobs

The Greens have got hold of an official report that National has had for 2 years showing that the SkyCity deal will add just 18 jobs to the economy as a whole. Joyce in his ‘defence’ says the report looks at the wider economic impact on Auckland city, rather than the number of workers needed at the convention centre. Uh, huh. Everyone thought they were promising 800 extra jobs for the country, when the real number is 18.

The SkyCity deal still needs some urgent attention from members of the public interested in getting a submission to the select committee. They close on Thursday 22 August next week. The politically corrupting influence of the gaming industry means that members of the public will have to push the politicians to stop them giving SkyCity these extraordinarily lucrative and destructive concessions for a economic pittance.

Even Treasury slammed SkyCity stitch up

Yesterday, National released hundreds of pages of documents on the SkyCity deal. They paint the picture of a government that locked itself politically into getting a deal and locked in SkyCity as the only option then was surprised when SkyCIty screwed them for everything it could get. Even the far from bleeding hearts at Treasury said it wasn’t worth the cost.

The Herald is reporting that the SkyCity deal to increase pokie machines in exchange for a convention center was done at 8pm this evening.

Deep hypocrisy vs government for sale

While it was stupid of Labour MPs to muddy the waters, the real scandal goes unremarked.

National’s trying to do something unprecendented – they want to give a private company a 35 year indemnity against costs arising from law changes. No-one else gets this. You don’t get money from the government when they make a law that costs you. Nor does any other business. Just SkyCity as part of their dirty deal with Key. Sign the petition to stop it here.

Who was missing from the Mighty River and SkyCity launches? Being seen at the front of positive government stories is a big part of the PM’s job, unless concerns over protecting Brand Key override that. The fact Key has been a no-show at these two announcements of central planks of National’s agenda tells you a lot about what the Nats’ polling says about them.