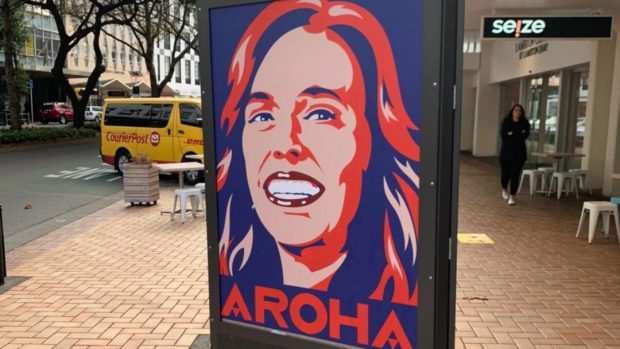 I normally do not do this, tempting fate and all that.  But the forces behind this election are so strong that it would take a really dramatic event to change current momentum.

Because kiwis are really proud that we are, so far, Covid free.  We celebrate that our team of five million knuckled down and did the hard yards and knocked the bastard off.  There are some really strong cultural and historical themes in that statement, but I am sure you get my drift.

And we are all united behind Captain Jacinda who kept giving us the most rousing of pep talks, who kept telling us clearly and without spin what we had to do to win, who explained the game plan, the tactics we would use and what it looked like as we advanced.

She already had our trust, her handling of the Christchurch Mosque massacre and the White Island tragedy showed us that under pressure she was formidable.

On the world stage she has also been exceptional, and is someone to be really proud of.

Elsewhere throughout the world they are not doing so well.  In fact when you look at democratic countries with right wing male leaders who talk tough they are failing.  Have a look at this graph if you need proof. I sort of feel sorry for National.  What sort of oppositioning do they do?

This is where they have failed.  They have been all over the place.  At times they critisiced the Government for being too tough, at other times for being not tough enough.  National’s problem was that at various stages it looked like they were actively cheering for the quarantine to fail.  and releasing racist comments and leaking confidential medical information for political gain was just too much for us fair minded kiwis.

And they have just fallen apart.  Six years ago I was in awe of their discipline and their messaging.  Now it is a joke.  And people know it.  The number of conversations I have had while door knocking with erstwhile National supporters who will now vote Jacinda is testamony to this.

The other problem for National is that it is now reverting to type and saying that Labour has been too strict.

In an earlier variation of this argument it said that we should be more like Australia.  You can see from the graph above how that would have worked out.

Then yesterday former PM John Key (remember him?) came out and said that we should let rich Americans into the country so that local workers can become serfs and also let in students who should be privately managed through quarantine because aw shucks it would be fine and the market always delivers.  From the Herald:

He told Newstalk ZB host Heather du Plessis-Allan that border restrictions should be loosened so that universities and companies could bring in foreign students and skilled workers and pay for their own quarantine.

And he said foreigners buying New Zealand property would provide work for Kiwis whose jobs are disappearing.

“Let’s focus on what we can do. We’ve got this crazy foreign buyer ban,” he said.

“Why don’t we let in rich Americans who want to build a house in New Zealand? Who cares? They’re in Mangawhai or somewhere, they are going to create thousands of jobs.

“Why do we care if someone who lives in New York wants to spend $10 million building a house in Auckland, using NZ craftsmen and NZ tradespeople?”

He has always had these weird ideas.  A few years ago I wrote this post where I concluded that Key wanted to turn New Zealand into a bolthole for the uber rich.

His suggestion concerning students is also crazy.  A sector of our population more likely to take risks and breach quarantine I cannot imagine, especially wealthy ones wanting to escape their Covid ravaged countries.  And Melbourne shows what happens when you leave quarantine measures to Private Enterprise.

This morning’s Herald poll suggested that most Kiwis by a margin of 68% to 29% prefer keeping the borders as closed as possible.  This is National’s problem in a nutshell.

While I am on the subject I have to question why Auckland Tourism Events and Economic Management did not, as far as I can tell, invite Councillors or Local Board members to the event and why a diversity of views was not offered.  Cheerleading business who just want things loosened up no matter how big the risk should not be in the job description for a Council controlled organisation.

Sure bringing in specific job skills for projects such as the City Rail Link are important.  But clearly kiwis are pretty comfortable with the way things are now and they do not want to risk it.

Which is why at this stage the election result looks like it will be clear cut.  And this is the basic reason why, putting to one side the infighting, the controversies, the loss of senior MPs and the seemingly never ending disclosure of scandal, National is struggling.

73 comments on “The Covid election ”