The Covid vaccine may not be the nirvana 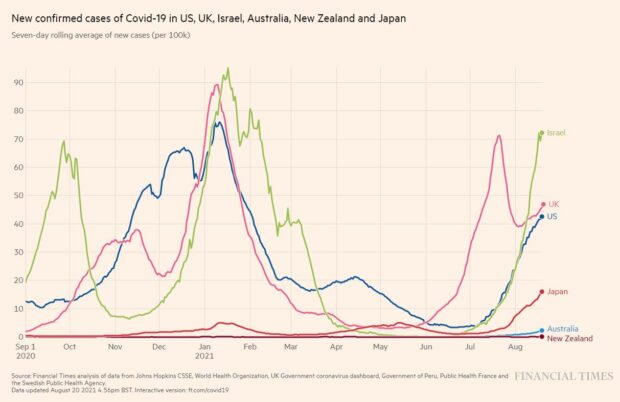 So here we are, four days into the latest Covid induced lock down.

So far my impression is that kiwis are doing what we do and complying with the instructions and getting on with things.  There are some exceptions, rich people with holiday homes seem to struggle with any sort of lock down.  I found the fact that the Coromandel is now a Covid hot spot somewhat satisfying.  All those people wanting to head off but having no where to go …

The progress of the infection is not surprising.  We have gone from a single community infection to ten to 21 to 30 and multiple locations of interest. Northcote, Avondale, McCauley, De La Salle and Lynfield Colleges as well as Auckland University and North Shore Hospital now feature in the media.  This is going to be a tricky outbreak to contain.

The good news is that the likely source of infection has been confirmed.  The possible source case was someone returning from Australia on August 9.

Over in New South Wales Gladys Berejiklian is upping the rhetoric on living with Covid.  On the same day that 681 new cases were announced she has promised freedom, just around the corner.

On the day New South Wales set a new daily record of 681 Covid-19 cases, the premier, Gladys Berejiklian, told locked-down residents across her state there are “exciting things to look forward to” when she introduces freedoms for vaccinated people once targets are met in coming weeks.

At the same time, Berejiklian announced the lockdown for all of regional NSW would be extended until at least 28 August, noting case numbers across the state “are not going where we want them to go”.’

This trick of promised abundant freedom while at the same time extending a lock down that has not worked because the initial response was so timid is getting to be a feature of right wing leadership.  Just check anything said by Boris Johnson over the past 18 months.

The news has provoked a predictable response from the usual corners.  There have been this never ending series of bad takes and some anger which masks the fear that people are obviously feeling.

Like our border system is crap.  Sure the system may have managed 164,932 people through managed isolation mostly without blemish but this has not stopped a few people from grabbing hold of the bull horn and complaining for all of their worth.

Kate Hawkesby expressed the preference to poke her eyes out with needles rather than watch the 1 pm press conferences.  Kate all you do is get your mouse and close the browser window.  It is not difficult.  Watching is not compulsory.  She also worried about kiwis disengaging their brains.  After reading her column I can only conclude that she has had a head start on the rest of us.

This is the same Kate Hawkesby who last year complained about the closure of the border and how it affected dreams of shopping in Melbourne’s Chapel St or sipping a Fiji Bitter poolside.

She also recently said that she felt

“desperately sorry for small businesses, for hospitality, for the beauty industry, the hairdressers, for school children, for frontline health workers, for those who don’t want to be stuck at home with the people in their bubble.

We just have to take it one day at a time I guess and stick with what we know.”

It is interesting that she did not express sorrow for the old, those with health issues, for supermarket workers or poor people who will be hit hardest.  And I have not heard her express any concern about Fiji, apart from the inability to sip Fiji Bitter.

This morning’s Herald was a shocker.

Steven Joyce asked for some humility.  I bet he had to look the word up in a dictionary before using it.  He complained about the suddenness of the lock down.  Obviously we should have done what New South Wales had done and prevaricated for weeks so that the virus could establish itself properly.  He also wants us to forget about the elimination strategy because it is bad for business.  There is a world full of countries experiences that suggest this would be a bad idea.

Fran O’Sullivan says that the country needs more facts and less podium exercises.  She says the Government should be telling business when it will be returning to level two and level one.  I don’t think that the Government’s crystal ball is working that well.

Claire Trevett chose to criticise the vaccination effort although conceded that a lock down would have happened even if the vaccination rate was 70% to 80%.  She also claimed that the Government had been caught on the hop which is a bizarre claim given that the lock down was effected hours after the initial case was notified.

Many of the critics are saying that the Government has failed because not enough kiwis are vaccinated.  The roll out is slower.  We had the benefit of not having a raging pandemic and could make sure things such as vaccine approvals could be handled properly.  We did not have to rush the vaccine out, nor did we have to corner supplies that other nations need and deserve.  Trying to corner further supplies of the vaccine for booster shots while large parts of the world are still unvaccinated to me is immoral.  And it is not the time of the initial vaccinations that are important, it is the time of the last one.

And the role out is going pretty well as intended.  And we are not wasting vaccine as other countries are. 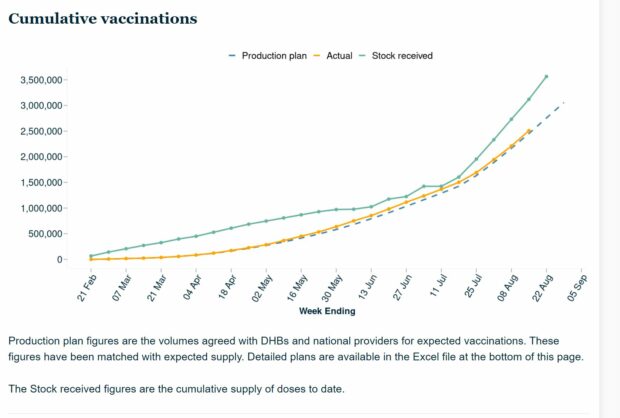 The doomsayers are asking why isn’t everyone vaccinated now so that we can be like some of the best performing countries in the world like Israel?  Which is struggling with a fresh outbreak.

Israel may have delivered 138 doses per citizen compared to New Zealand’s 53 but it is reeling from a recent surge of infections that is stretching its health system’s capacity to breaking point.

From Meredith Wadman at Sciencemag.org:

“Now is a critical time,” Israeli Minister of Health Nitzan Horowitz said as the 56-year-old got a COVID-19 booster shot on 13 August, the day his country became the first nation to offer a third dose of vaccine to people as young as age 50. “We’re in a race against the pandemic.”

His message was meant for his fellow Israelis, but it is a warning to the world. Israel has among the world’s highest levels of vaccination for COVID-19, with 78% of those 12 and older fully vaccinated, the vast majority with the Pfizer vaccine. Yet the country is now logging one of the world’s highest infection rates, with nearly 650 new cases daily per million people. More than half are in fully vaccinated people, underscoring the extraordinary transmissibility of the Delta variant and stoking concerns that the benefits of vaccination ebb over time.

The sheer number of vaccinated Israelis means some breakthrough infections were inevitable, and the unvaccinated are still far more likely to end up in the hospital or die. But Israel’s experience is forcing the booster issue onto the radar for other nations, suggesting as it does that even the best vaccinated countries will face a Delta surge.

“This is a very clear warning sign for the rest of world,” says Ran Balicer, chief innovation officer at Clalit Health Services (CHS), Israel’s largest health maintenance organization (HMO). “If it can happen here, it can probably happen everywhere.”

And if you need further proof then England is also struggling with a further surge of Covid.  The approach of winter may be accelerating the spread of the virus with our without the vaccine.

The conclusion from Israel’s experience is pretty clear, vaccination may not be the silver bullet some are hoping for.  And instead on relying on vaccinations solely a variety of approaches will be required, which is pretty well what our Government is doing.

The critics clearly have a zero tolerance to any perceived weakness.  Which is rather weird because we are dealing with a brand new virus that is mutating and so far has shown that it is able to defeat the best that the most advanced nations in the world have thrown at it.

In the meantime stay safe, socially distance and wash your hands.  And look after each other.

151 comments on “The Covid vaccine may not be the nirvana ”