The false economy of sprawl

Housing is too expensive. It has been driven up by ‘investors’ in pursuit of a safe, hands-off, tax-free return. 8% of the people own about 40% of the houses. That’s the problem – over-allocation of savings from the upper-middle class into housing pushing prices up, out of reach of the middle and working class, who become their tenants. The Nats’ solution: more sprawl.

The Nats’ logic is that if you need cheaper housing, you should build where the land is cheaper. But that ignores fundamental economics: the value of land for housing in different parts of a city will be in equilibrium once all costs and benefits are accounted for. So, when the price of land somewhere is lower than somewhere else, it’s because the other costs are higher.

Why is the land in Drury or Dairy Flats cheaper than the land in Tamaki or Glen Eden? Because the costs of using it for housing for an Aucklander are greater – if they weren’t then the market would cause the price of the ‘cheap’ land to rise. Basic economics that you would think National would understand.

You pay more for transport (which is much less likely to be public transport in sprawl suburbs), the council pays more for infrastructure, the government pays more for roads, and we all pay more in climate change causing greenhouse emissions from that extra transport.

An Aussie study shows that the non-land and non-construction costs of building additional housing are twice what they are for a suburb 40km from the CBD than 10km from the CBD. Applying that to Auckland’s existing sprawl plans means the country will pay an extra $40 billion that it wouldn’t pay if the houses were built within existing urban limits – half of that is transport costs, a good slice of which is imported oil (better hope the oil supply keeps up of those ‘cheap’ exurbs suddenly get very, very expensive). 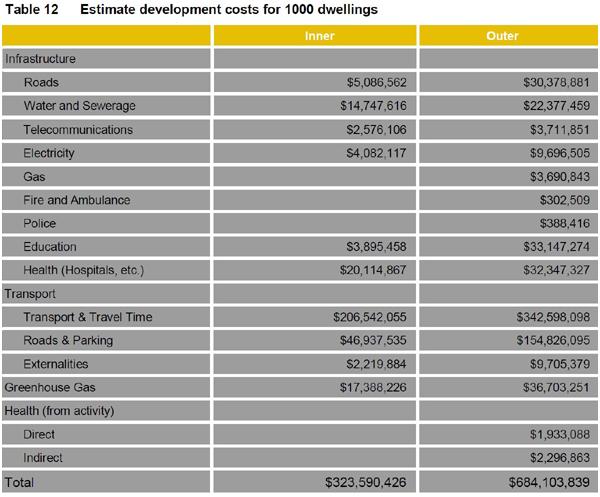 So, this is the false economy of sprawl. The land is cheap and so you can buy a house cheaper, but the land is cheap for a reason – all the other costs associated with building a home on it. And those costs don’t go away, they build and build.

“The infrastructure of suburbia can be described as the greatest misallocation of resources in the history of the world.”

What gets my goat is that National must know this. If they don’t understand the basic economics – that distant land is only cheap because there are other very large costs of building there – then someone must have explained it to them by now.

So, they’re clearly well aware that they are not proposing the most economic solution to the problem of how to house more people. What are they working for? Whose interests? Not ours, not the ratepayers’, not the poor schmucks who can’t afford to get into the housing market who won’t be able to afford to transport costs form the exurbs, not the taxpayers.

That only leaves the people who own the land and stand to make a nice fat profit from developing it.

95 comments on “The false economy of sprawl ”