This government’s got a real talent for manufacturing crisis to suit them.  The debt disaster is a classic – in order to get out of debt we have to cut public spending to the tune of almost $1billion and sell assets.

Far from being in the same government debt league as the PIGS countires; Iceland, Ireland, Greece, Spain and Portugal, New Zealand’s government debt is actually third or fourth lowest in the OECD.  Where we do have a serious problem is in private debt with mortages and business loans (mainly owed to Australian banks). 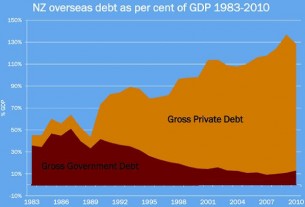 And cutting public services will do absolutely nothing to help fix private debt – except maybe to make it worse by laying off public sector workers  and making services more expensives.

The government’s also overplaying that $300m -$380m that they’re borrowing each week. CTU economist Bill Rosenberg says that the number is inflated by looking at one year only, when borrowing requirements are near their peak and Treasury is borrowing much more than it needs because lenders are lining up to lend at attractive interest rates.  He reckons it would be fairer to look ahead over four years when the average new borrowing requirements will be less that half that.

However, the public has swallowed the line that government accounts are just like households ie debt and borrowing BAD so it’s unlikely these particular myths are going to be busted anytime soon.

55 comments on “The great debt myth ”