The Herald’s idea of balance 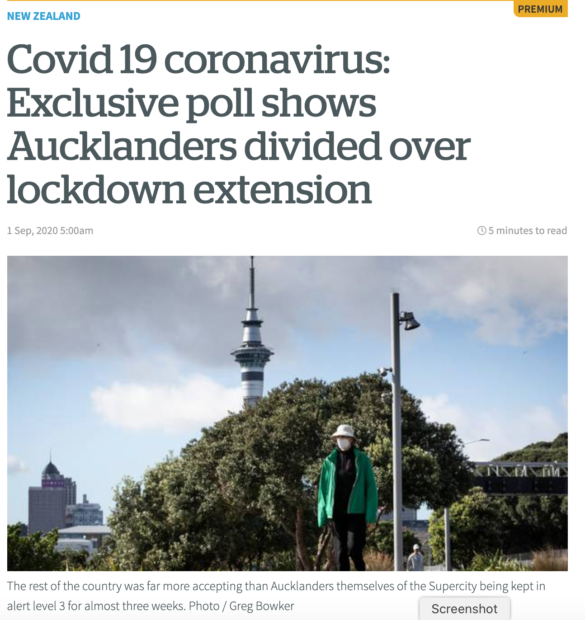 It was an interesting day in the Herald yesterday.

It published the result of a poll which suggested that most Aucklanders were actually pretty chilled about the lockdown.  But the headline suggested that the situation was much more complex.

The first two sentences were:

Auckland is strongly divided over whether the city’s lockdown extension was an appropriate response to the resurgence of Covid-19, a new poll shows.

But the exclusive new poll shows the rest of the country was more accepting of the Super City being kept in alert level 3 for almost three weeks – with many wanting it extended even longer.

What were the actual figures? In the interests of balance Simon Wilson chose to respond, in all places the Herald.

That was a remarkable survey in the Herald today. Around 90 per cent of New Zealanders said they supported the Government’s most recent lockdown, and around one in five thought it should have been even longer. The story is here.

Few policies in any field would be a popular as that.

Perhaps even more remarkable was what it revealed about Aucklanders. Right through the level 3 lockdown media carried stories about the hardships we faced. Businesses failing, jobs gone, school students’ progress undermined. The lonely and everyone at home doing it hard, all feeling that much worse.

These things were and still are real. For so many of us, the second lockdown, shorn of the novelty of the first, was not as severe but somehow it was worse. I’m pretty sure we’re over it.

But were Aucklanders in revolt? Were we even divided? Despite what you might have thought from some of the photos of people on the beach, that survey revealed 89 per cent of us supported the lockdown. That compares with 91 per cent of the whole country: it’s a statistically insignificant difference. That’s big news.

Instead we have a negative spin on something which should be a good news story for the Government, and then positive spin.

The negative was totally unwarranted.  The positive should have been the story.

Dear Herald.  This is not balance.

43 comments on “The Herald’s idea of balance ”