The rich want to hide their wealth because of kidnap threats 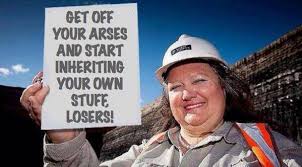 I kid you not. The wealthy in Australia want to avoid publishing corporate tax information because of the threat of kidnapping.  At least this is what they are saying …

The assistant treasurer, Josh Frydenberg, told the Coalition party room on Tuesday the publication of the financial statements of large private companies raised “real safety concerns”. He said the 700 private companies captured by the new law covering more than 1,600 companies with a turnover of more than $100m should be exempt.

The prime minister, Tony Abbott, agreed the Coalition would implement this exemption. The changes will require a legislative amendment.

Frydenberg was responding to questions from senator Cory Bernardi and the New South Wales MP Craig Laundy, who argued private companies should be exempt on commercial and personal security grounds. They argued the information could harm a company’s commercial operations and potentially leave private business people and their families at risk of kidnapping.

After the meeting, Frydenberg said: “The government is considering its response to concerns about the publication of information about the tax affairs of privately owned Australian companies. Legitimate concerns have been raised about the misuse of information related to privately held companies that is made public as part of tax transparency measures.”

There are two rather large problems with this justification.  Firstly there is no evidence of an increase of kidnapping of Australia’s uber wealthy since the requirement was put in place.  Secondly  their lifestyles tend to be that ostentatious that a subscription to Womens Day will provide as many targets as a kidnapper could ever want.

Of course if the uber wealthy are that concerned the problem could be easily solved.  All they have to do is share the wealth around a bit.  They can retain sufficient to live more than comfortably.  Decreasing inequality has been shown to reduce crime and improve societal outcomes.

And how bad is inequality worldwide?  Well how about this for a statistic?  In 2014 Wall Street’s bonus pool was double the combined earnings of all Americans working full-time jobs at minimum wage.  We have failed to change things following the Global Financial Crisis and have let the inmates take over the asylum again.