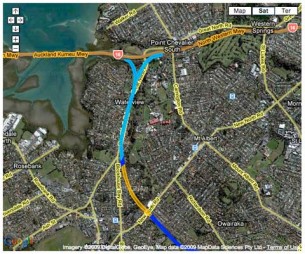 You may not know this, but about one in every 400 cars that go through the Waterview tunnel pay toll to go faster than the legal speed limit of usually 80 km/h. Thing is, these drivers often don’t know it either till they get the speeding ticket (AKA infringement notice) in the mail.

All approaching motorways to the tunnel have variable speed limits. However, they don’t seem to be enforced or ‘policed’ at all. Certainly, on the North-Western motorway (SH16) you’ll find drivers doing all sorts of speeds when the signs state 80 km/h as the limit; it’s much worse during the School Holidays. No radar control, no speed cameras, no nothing.

Little wonder then that when they race into the tunnel some forget to slow down to avoid the fine. Regular commuters are familiar with the point-to-point speed cameras, possibly because they have been stung once or because word of mouth; that sort of ‘news’ travels fast. However, in the holidays, many non-regulars use the tunnel and the number of breaches of the speed limit shoots up. You don’t need to be a rocket scientist to work that one out.

I have never quite understood why you are not allowed lane changes in the tunnel. If everybody is doing the exact same speed there would be no point, would there? Again, the range of speeds inside the tunnel is not quite as ‘impressive’ (more like hair-raising) as on the approaching motorways but there still are the ‘slow pokes’ and the compulsive ‘speedsters’ with limited self-control and even less foot-eye coordination (AKA lead-foot syndrome).

Some interesting stats about the tunnel use can be found here. I have no idea why this is the only article (syndicated here) in which one can find this info but no doubt there’s a reason for it; NZTA logic defies common sense at many levels and NZTA is apparently not a happy place to work. This should raise some concern because they’re tasked with looking after our safety on the roads.

I don’t have a problem with speed reduction and better enforcement of the law. It can save lives, it saves petrol, and it reduces wear and tear and thus is better for the environment all around and our pockets. However, some people react to such proposals as if they are an acute threat to their lives. As if they have a God-given right to speed, and kill. Well no, they don’t, but don’t tell them that, or they go OTT. In my opinion, the reaction to curbing someone’s sense of entitlement is always the same. For example, listen to all those wannabe Rambos who have to sell back their priced and beloved MSSAs to the Government, with inscriptions and all. As if the world as we know it is ending – it is, but guns won’t help much in the long run. 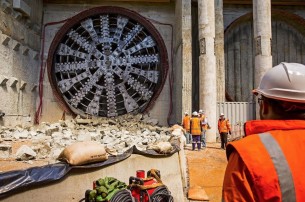 Anyway, it is great to have the Waterview tunnel and it would be even better if/when we have a properly designed and functioning Public Transport in and around Auckland, including a railway connection to the Airport. In another post, I might write about the shambles that is Auckland International Airport and the Koru Lounges. Then again, maybe not, because I would have to confess that I have never set foot in one of those – it is not on my bucket list either, shock horror, nor is valet parking at the airport. You know that you have failed in life when you have lost the will to set foot in the revered Koru Lounge at Auckland International Airport. The meek shall inherit the Earth but not the Koru Lounge nor are they allowed to speed in the Waterview tunnel, which is only for those who pay the toll.

Ok, this post lacks focus and direction but Micky’s occupied with and by chookogeddon in Titirangi, which in reality is a social, community issue, and not an animal welfare one. I have nothing much to say about Assange, Clinton, Brexit, Corbyn, Trump, NZ talkback radio, or Mike Hosking, for example, and I’ll leave that to others. Sorry about that.