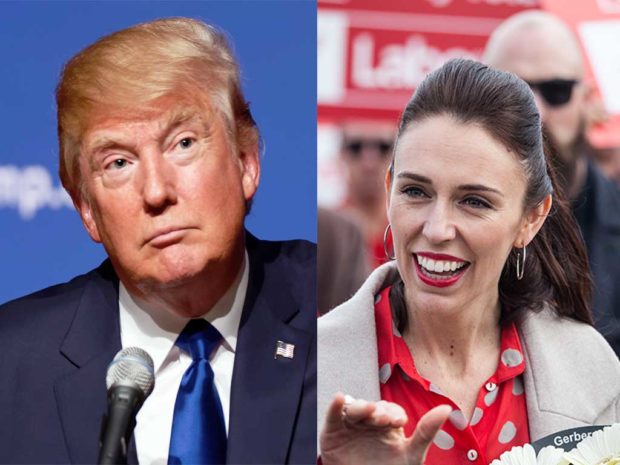 I must admit some trepidation in writing anti Trump posts.  I thought they would be universally acclaimed and accepted on this site.  But like Brexit there is a significant number of lefties who think differently to me.

And why do I attack Trump?  Well he is a climate change denier misogynist who does not pay his bills and cultivates relationships with white supremacists and attacks the press for holding him to account and has a terifying lack of grasp of the nuances of International relationships and he is a bully but apart from that I am sure he is a swell guy.  I would prefer that he was not nominally in charge of the world that I live in. And I don’t think Hillary would have been as bad.

But some lefties think that to attack Trumps to attack the far left.  I am still trying to work that out.

He has recently been holding a Social Media Summit.

Think Jacinda’s post Christchurch Massacre summit but with the completely opposite goal and full of crazy people.

Remember Ardern’s international gathering?  The Herald had this description:

Prime Minister Jacinda Ardern has opened the Christchurch Call summit in Paris with an appeal to tech companies to review their business models that can pull users down dark rabbit holes to radicalisation.

And she is asking online platforms like Facebook, YouTube, and Twitter – considered to be so global in reach to not have to answer to anyone – to be more transparent by publishing progress reports regularly.

Ardern arrived at the Elysee Palace to a French guard of honour and a warm la bise greeting – a kiss on each cheek – from French President Emmanuel Macron, who hosted lunch.

Later representatives from Facebook, Twitter, Google, Microsoft, Wikimedia and Qwant as well as the leaders of seven countries and the European Union arrived for the summit.

The Christchurch Call to Action aims to take collective action to prevent a repeat of how the terror attack on March 15 was weaponised on social media.

“I stand before you with the 51 lives lost in New Zealand heavy on my mind,” Ardern said in her opening address to the summit.

“The hearts of Aotearoa still ache … Let us all here the call from Christchurch today.”

Ardern asked tech companies to enforce the standards they already have by preventing such content from being uploaded in the first place.

She also addressed the business models of social media companies that are designed to grab users’ attention in a way that can pull them into a single and increasingly radical narrative.

“We ask that you assess how your algorithms funnel people to extremist content and make transparent that work.

Pretty hard to disagree with.  Unless you think that racial hatred should be tolerated. Funnily enough Trump did not show up to that meeting of International leaders.

Instead he thought he should have a summit to celebrate the complete and unfettered freedom of freedom of expression. The sort that appears to have energised he who shall not be named

So what did the Trump gathering want to achieve?

One leader wanted to prevent further atrocities. The other leader wants to get re-elected no matter what.

And unlike Ardern’s meeting Trump did not want to have the heavyweight social media companies at his meeting. Vice had this description in anticipation of the big event:

Tomorrow, President Donald Trump is meeting with a series of right wing figures at the White House to discuss social media issues. But Facebook and Twitter won’t be there. In fact, the only social media network that has publicly said it’s attending is Minds—billed as the crypto “anti-Facebook” and once home to several neo-Nazi extremist groups.

Pulp, a public relations firm that counts Minds among its client list, sent Motherboard a photo of the invitation the fringe social media site received to the White House for the summit.

“Minds.com is the only social media network invited to the White House’s social media summit!” wrote the Pulp representative in an email to Motherboard. Facebook and Twitter, social media companies with an astronomically larger number of users than Minds, were excluded from the summit.

A previous Motherboard investigation found that miliant neo-Nazi groups connected to Atomwaffen Division—a violent American hate group connected to several murders—was using Minds as a platform for recruiting and spreading propaganda. Minds eventually banned the accounts when Motherboard showed them to the platform, but the company’s lax content moderation allowed them to proliferate unchecked for months.

The White House declined to comment on the guest list of the summit, but Trump has made the perceived “bias” against conservatives by social media companies one of his core talking points in recent months. Earlier this year, Trump met with Twitter CEO Jack Dorsey and reportedly discussed such pressing issues as why his follower count declined.

Well hand me a tinfoil hat and call me a George Soros disciple but I get the feeling that the Trump gathering may have been in response to the Ardern gathering.  CNN provides this background to who was invited:

The White House has not extended invitations to Facebook and Twitter to attend its social media summit on Thursday, people familiar with the matter said.

The people, who spoke to CNN Business on the condition of anonymity, suggested it was not surprising. They said they believe the summit would amount to a right-wing grievance session and was not aimed at seriously discussing some of the issues facing large technology companies.
A spokesperson for the White House declined to comment.

The White House announced the summit in June, describing it as an event to bring together “digital leaders for a robust conversation on the opportunities and challenges of today’s online environment.”

So compare and contrast.  Am I being too conspiracist on it or was this a Trump attempt to undermine what Ardern wants to achieve?