Paul Ryan, or at least his social media team, wanted to celebrate the fact that a High School secretary was pleased that her weekly pay check increased by $1.50 per week. 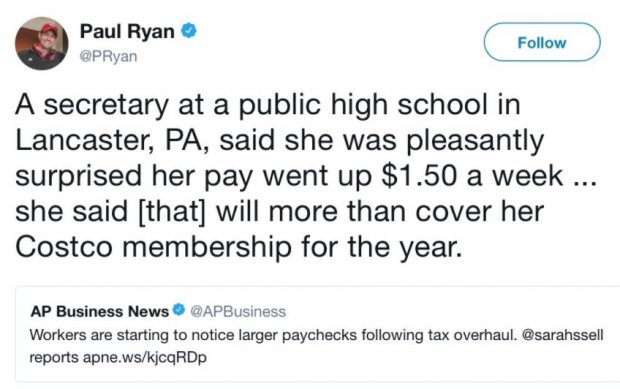 But it appears that the secretary was being sarcastic rather than grateful.

CBS News found the secretary Paul Ryan bragged got a $1.50 a week of his #GOPTaxScam. Check out the video below.

Charles, a Koch brother in Wichita, said he was pleasantly surprised that his pay went up $26,923,076 a week… he said [that] will more than cover the cost of buying several more Paul Ryans. pic.twitter.com/pyNYDtTUGw

I was traveling and missed the #PaulRyanDollarFifty story. Is it too late for me to say how offensive, condescending, elitist, and out-of-touch it was for a guy who just gave tax cuts to billionaires? https://t.co/PgZI8xR5S3

#ThanksForNothingPaulRyan My daughter can now make a $6 dent in the the $200 a month health care increase your policies caused. Your crumbs are tasteless.

For many, many more check out the twitter hashtag #thanksfornothingpaulryan