We say we want a revolution…

Before anyone thinks this is an argument for not ending capitalism, it’s not. It’s a post designed to break the false dichotomy that currently exists within the left over capitalism and what to do about it.

Instead of that same old back and forth argument, what if we talked about what we want instead?

Watching what is happening with the Black Lives Matter movements currently, it’s hard not to feel a sense of both hope and despair. The actions are righteous, timely and inspiring. The dilemma is whether the neoliberal systems will adapt around BLM, allowing just enough change to ensure neoliberalism’s survival. Hence at the point of all hell breaking loose in the US some prominent conservatives finally started speaking out against Trump, as the choices were fast narrowing to anarchy or fascism.

We are seeing change in some parts of the States around police powers and funding, as well as a welling up of activism around the world. These are necessary changes and there is much potential for people of colour and other progressives to push forward and hold a line. But this is not the same as system change if neoliberalism simply expands a bit and then recolonises.

Think the co-option of feminism, where the overculture cherry picks the bits that serve it or that it can no longer constrain and then rejects the rest. Or climate action where neoliberalism is placating us with electric cars and carbon offsetting. We can have our current, comfortable lives and save the planet! This is a deadly dead end, but paved with roses, good intentions and netflix.

Enter stage left: coronavirus. The great leveler of neoliberalism, and probably one of the few chances we’ve had in the past 40 years to turn things around. I’m wondering if the reason so many white people have taken to the streets in the US and elsewhere is because covid taught us that our security isn’t what we have been told. It shone a lens on society’s neoliberal skeleton, exposing just how fragile it is and white liberals suddenly feel motivated to join those who’ve long known the system is unstable.

For many years people, including some on the left, have said that various movements have failed because they didn’t bring down the man. In the West Occupy, Standing Rock, BLM, XR and SS4C have all been analysed as failures because they didn’t bring about an immediate utopia or a revolution. But there are strong threads running through all those and building cumulatively every time a new action or a new uprising happens. Those modern movements are in turn built upon the mahi of generations before who figured out what was necessary and possible in their own time to create the best chance of radical and meaningful change even if it doesn’t happen immediately. Something else needs to happen as well. 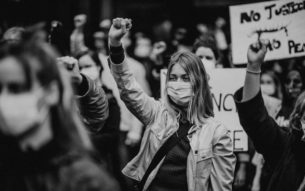 The leading edge social change ideas that interest me most at the moment are saying that for deep change to happen we have to imagine what we are changing to. Not in its entirety, but that we create a frame that is inviting and desirable, that we feel and ‘get’.

Most people aren’t revolutionaries. We have more drivers of radical change at the moment thanks to covid, but we’re still not at the point of enough people being willing to give up the comforts of capitalism. We have models waiting in the wings, including transition ones that aren’t so scary to the horses, but we don’t yet have a compelling set of narratives that appeal to enough people for them to act. What we have is the torrent of stories of just how bad shit is. Most people will seek security in the face of that, not positive radical change.

We also have the basis of political activist movements that are critical to the leading edge that parliaments and mainstream culture will eventually follow. BLM and the climate movements in particular seem organised in a way to sustain themselves over time. But they are still largely protest movements without a coherent offering of something better, a way out of the shit show.

If we can’t articulate credible alternatives, how can people be expected to give up the systems that currently offer them the best chance of a decent life? So what do we want? What do we see that could be different? Can we imagine a shared future where things work out and that appeals enough to work towards together?