Just finished Whale Oil by Margie Thomson. about the Blomfield vs Slater case.

It was a case now lost by Cameron Slater because after 7 years of trying to delay it, before a judge who was finally able to look at his ‘proofs’, he was simply unable to justify the claims made in a representation of the posts he wrote about Matthew Blomfield. Like every previous state body like the SFO, MBIE, IRD, Privacy and Human Rights, it was judged to be complete and utter bullshit.

Most of those investigations had looked at the same box or copies of the hard drives and physical files that were the property stolen from Matt Blomfield. Apparently just about the only state arm that hadn’t seen that property were in fact the police.

Probably because they didn’t want to in case they had to actually deal with arresting someone for thieving it or receiving it. The contrast between the police reaction to this case and the over-the-top reactions when the same kind of theft happened to Cameron Slater by ‘Rawshark’ is rather hard to fathom. Perhaps it was because Judith Collins, a hat-tipping mate of Cameron, was police minister?

Margie Thomson is a very good writer. Trying to cram 7 years of hell for her subject into a book is a hell of a task. While it often reads like fiction, it is really a accurate and true story. You can tell – it is too strange to be fiction.

It is a bleak topic, the misuse of position and the lack of use of police powers, but just as worth reading as Dirty Politics. It shows some of the really dangerous fracture points threatening social stability arising from online media – from a different perspective.

Instead of the look at a broad range of political and corporate immorality that was in Dirty Politics. In this case you see what happens when a ill-defined area of the societal bounds of behaviour is exceeded by a conspiracy of opportunists and the shit is dropped on one person, their business contacts and their family. Now this didn’t just happen to Matthew Blomfield. It happened to a lot of other people and companies as well over the reign of terror from Whaleoil, Kiwiblog and few other immoral bloggers and other people in social media.

I have been around the edges of this sordid war between the abusers of the net and its defenders for quite some time. I found it interesting that some of the detail in this book is new to me.

It has moderately interesting cast of minions and villains, many of whom many of you may not have heard of before.

Marc Spring – well what can one really say about this malevolent nutter. To me he is just as deranged and as tenacious as ‘Dad for Justice’ was a decade ago on this site. Popping up under different aliases arguing with his other identities.

But unlike d4j, Marc Spring has always seemed to me to be just a mean fool trying to skulk from the shadows as a “justice campaigner”. I saw him originally as a simple set of trolls that require infestation control on this site. I and other moderators automatically moderated out his comments as making assertions of fact without evidence – which is something that is actionable. Over the years I’ve also had to read his emails about Matt Blomfield and largely ignored them as being pretty obvious fantasies or opinions that he also asserted as being fact.

But for quite some time he was probably the most prolific troll in our local net. Pete George at YourNZ apparently got a shock when he realised that 47 of his commenters were in fact Marc Spring.

Reading the book, I was struck on how it appears that Amanda Easterbrook was probably the nastiest and probably the most intelligent villain in the mix. Based on the OIA material finally released by the SFO, she seems to have specialised as evil genius of the vaguely plausible storyline. One where out-of-context snippets were woven together to seem to the casual observer to be more than they actually are,

The fantastic conspiracy scheme that Cameron Slater was pushing back in his 6 month campaign against Matthew Blomfield back in 2012 were simply just fantasies. According to a very old and delayed Official Information Act request to the Serious Fraud Office, that just got finally responded to earlier this year. She appears as both a complainant and the person who concocted those weird and complicated claims. Looking at the style of the semi-plausible bile she was using, it makes me wonder what else she contributed to the whaleoil site. It seems quite familiar in other Slater campaigns.

Moreover, in her letter to a SFO investigator, she stated that she had been the receiver of the Matthew Blomfields hard disks and filing cabinet contents. The instruction came from his former business partner Warren Powell. She used that to concoct the stories that the dumb sucker Cameron Slater parroted (I had thought that they were a bit too complex for him).

There were the other minor players. Like Dermot Nottingham who ran and still runs the laudafinem site, for which he is still serving a home detention sentence after being convicted of 7 charges of online and offline harassment. He was the incredibly incompetent and inept legal friend Cameron Slater really shouldn’t have wanted to use in his Blomfield vs Slater. In a failed private prosecution on me, Pete George, and two newspapers he was mainly notable because he simply wasn’t able to string any legal principles together coherently.

Looks like Cameron Slater in the end was just another fool who got screwed over by Warren Powell. While Slater was not prepared to name him as the source of the hard drives and filing cabinets that he had provided as part of his jilted revenge. Otis (as WP is known as) obviously treated Slater as some kind of minor minion… Not a person for anyone to trust.

On the other hand, I’ve dealt with Matthew Blomfield for the last five and bit years – mostly online, but also occasionally passing at the courts.

I’d have to say that to me he has been a bit of a diamond in the rough entrepreneurial type. I’m familiar with their ways and always treat them as being a bit like handling mercury fulminate. To be treated carefully and with good protection. He is enthusiastic as a pitbull pup with the family kids, and it would be just as inadvisable to cross fair bounds. But fundamentally someone that I have never had any cause to mistrust.

I really like the way that Margie has managed to portray him as being no frigging hero.

And I have to say, that now I have found out about it, I’m a bit worried about the courtrooms of this country. He is embarked on doing a law degree. I suspect that he is going to be an unholy terror in the courts when he finishes his law degree and slaps on a bit of polish over those rough edges.

Meanwhile Cameron Slater has a couple more defamation cases to lose. He might get lucky with Colin Craig. But with his paymasters also in the gun for the case brought by a number of health professionals against the purveyors of junk foods and their PR minions, I suspect that case will be going to fruition.

I’d also invite speculation about who or what will get control of the Whaleoil site next year after the Cameron Slater and his holding company co-defendant get awards against them and as the bankruptcies and liquidations proceed.

Personally I’d like that bit of sordid and faded history to be consigned to the historical archives at NatLib, and only available to historians and the continuing legal expeditions. 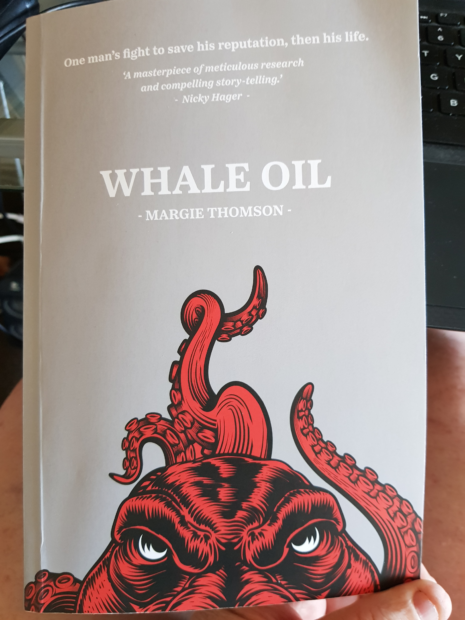