When Earth’s future is under attack … So Donald Trump has decided that preserving the world’s environment is not in America’s best interests.

Apparently there are some coal mining jobs to save. The fact that the US of A is doing a sterling job in developing high tech jobs in the renewable energy sector and that there is a lot of potential growth in the sector is irrelevant. The US of A needs to have coal mining jobs. Nothing else matters.

Trump is becoming a caricature of all that is wrong with right wing politics. And the Simpsons predicted this 17 years ago …

And Rage Against the Machine also predicted this 17 years ago … 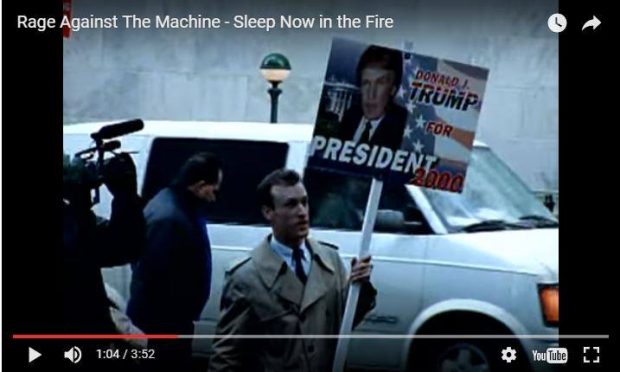 In a very unfortunate coincidence US Secretary of State Rex Tillerson is visiting New Zealand on Tuesday of next week. Tillerson has the unfortunate characteristic that he is a former oil baron and was awarded the Russian Order of Friendship in 2013 by President Vladimir Putin for work he performed on completing a deal to explore the Arctic Ocean for oil.

Audrey Young has attempted to paint him as a Paris Accord moderate. But his position in the oil industry and in Donald Trump’s cabinet mean that he is going to attract attention.

350 Aotearoa is going to hold a reception for him, and not the usual sort.

On Tuesday, the US Secretary of State, Rex Tillerson is landing in Wellington to meet with our Government.

We need to provide the opposite of the warm welcome Wellington normally gives: we need to let Tillerson and The Trump administration know they are not welcome, and call on our government to distance ourselves from climate denial and warmongering.

This visit comes at a time when Donald Trump has announced that he will pull the United States out of the Paris Climate Agreement. 2016 was the hottest year ever, and a huge wakeup call. But 2017 is a fire alarm. Trump pulling out of the Paris Agreement is a crime against our global future. Now is the time for New Zealand to step up and show leadership on climate change by strengthening our own commitment to the Paris Agreement, not engaging with those who threaten the future of our planet.

Hundreds of us will join together to protest outside Parliament on Tuesday. Click attending for alerts about the action here – and start making your placards.

We don’t know yet what time Tillerson is to be arriving in Wellington, and even on the day it could well change. If you have any tips, let us know!

Some people have suggested that Trump pulling America out of the Paris Accord may not be such a bad thing.  It may actually spur worldwide action into dealing with this most difficult of problems.  I hope they are right.  But Trump could do a lot of damage.  It will be a case of how backward America goes compares to how much more action the rest of the world takes.

In the meantime when Earth’s future is under attack …

36 comments on “When Earth’s future is under attack … ”