Why the America’s Cup is better than Rugby 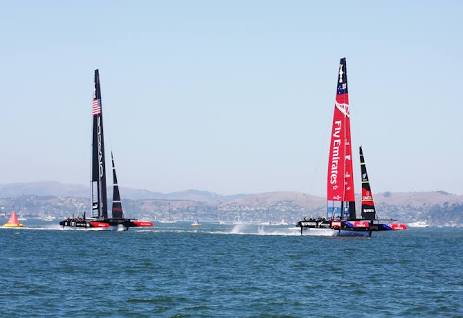 I was painting my Dad’s verandah on the weekend, so we were tuned into sports, talkback, and nostalgia-hits stations all day. All commentators noted they were flooded with emails and texts about the yachting, and very few about the multiple international Rugby fixtures.

I also needed a way to talk about the America’s Cup on The Standard. There’s still a few weaklings about who say we shouldn’t dirty ourselves debating sport, because apparently it’s clearly of no political note whatsoever.

The only reason we’re any good now is because we’ve strip-mined Pacific island nations’ best talent for Rugby greats, for 40 years. They get well paid, become minor celebrities, rise to the level of their skill, and finish in their late 20s on contract in U.S., U.K., Ireland, or France. In their 30s they are done. Only the elite get secondary training to help them afterwards. We just use them up.

New Zealand delivers nothing of note back for their labours. No Super Rugby entry invitation is needed when we can turn their athletic pool into the equivalent of Nauru after phosphate excavation.

Rugby’s benefits accrue to one person and their immediate family. The skills are usually kept in New Zealand, or exported away from those islands. No new industry is formed on any island nation other than ours. No competitive national teams are formed in the 15-person game. No sporting equivalent company of Motown Records is formed in their capitals. Just a New Zealand Rugby Union empire, churning through them.

The America’s Cup is driven by local innovation. Tiny, well-known example: the Warkworth company Core Builders’ Composites is the primary supplier to Oracle. In 2015 it was provided with up to $17.25m from the New Zealand government’s Callaghan Fund. That company also subcontracted a number of New Zealand companies to help build the AC45 boats that were used for the primary series of races that took place around the globe. There are tonnes more examples over the years.

Rugby is boring and dumb. We win all the time. And in the times we lose, as in the women’s Olympic sevens team, we were supposed to win and should have. It gets grating. The men’s pecs are more articulate than their mouths. They all look like boofheads that you wouldn’t want your daughter near.

The America’s Cup is a saga.

They’re as corporatized as each other.

They’re as elitist as each other.

They’re as populist and televisual as each other.

But only the America’s Cup is driven by local industrial innovation.

And the America’s Cup crews are not yet populated by self-worshipping useful idiots. Yachting assholes are genuine assholes.

The America’s Cup is not freighted with a culture of boofheads, who are used up in seven years and spent.

The America’s Cup occurs with sufficient gaps between each one that we really tune in, rather than being bludgeoned with news articles about someone’s hamstring twinge.

Winning the Rugby World Cup was greeting with a national shrug, but winning the America’s Cup is such a moonshot in all senses that we are thankful for a podium finish.

And somehow the America’s Cup more successfully integrates residual nationalist urges to draw us together, than Rugby’s tired culture of RSA-style wankathons about who they played in high school, how they nearly made a rep team, and pathetic ex-test-team saddos marketing z-grade finance houses and timeshare condos.

The America’s Cup is better than that.