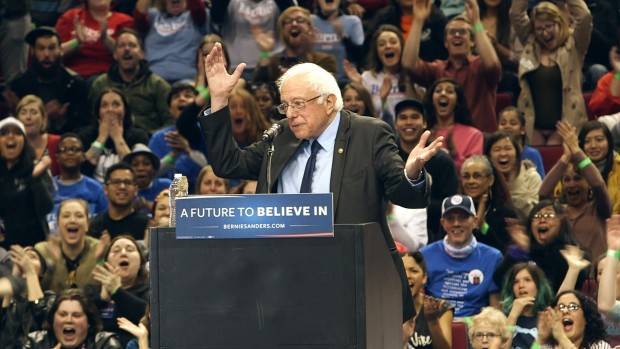 It will take a full renewal of democracy in the United States. But not in the Queensberry Rules-regulated affair that got Omaba there. No, this is going to be the political equivalent of an MMA fight (think George St Pierre v Matt Serra).

The Sanders premise is that in the general election he will turn out voters who have never participated before, swelling the electorate in an unprecedented way which sweeps the incumbent president aside. Yet the turnout in Iowa this year barely matched the turnout of 2016. There was no surge. Bernie is no Obama.

But he’ll then do great in New Hampshire. All those loser candidates hanging on: Balkanisation benefits Bernie.

The Boston Globe reports: “Some Warren backers have suggested that liberal groups are afraid of raising the ire of Sanders’ fiercest online defenders by endorsing Warren, making Sanders a safer choice.” The Globe quotes the head of a prominent progressive group: “It takes extra boldness to endorse Warren because of the vitriol from Bernie Twitter…” OMG man up Sister. It’s not going to be handed to you.

If you think this sounds really similar to every other hard left candidate in the last 50 years who got put up there by a wonderful band of ideologically certain supporters … you’re right. But then, if being vituperative and certain is a bad thing in politics, tell that to the Trump supporters who got him there. This is no election for politesse. If Bernie wins the Presidency, it will be because his entire massed supporters pulled the bloodied lever of power out of the cold dead hands of Trump’s equally feverish supporters.

Progressive activists who don’t back Bernie will indeed feel the Bern. Convention won’t get to Chicago 1968 levels, but it might look something like Louisiana politics of the 1930s, or Texas Senate politics where LBJ’s bad bad boys got stuck in. People are going to get hurt. But that’s because there’s the most to lose.

Let’s stop worrying about whether the American public will allow a gay married man like Pete Buttigieg to get into power. They won’t.

Bernie’s supporters need to generate as much rage and vengeance as the winning Republicans do. It’s a great moment for the left to understand the bile and invective needed to reverse the great sweeping tide of the right across the democratic world. It’s not revolution. But: There Will Be Blood. Democracy such as it remains has come to this.

Hopefully, for vengeful Sanders supporters, summoning mass venom is easy. The Washington Post reports that since the beginning of 2019, nearly 3,000 active Facebook pages supporting Sanders have generated more than 290 million interactions. This breeds a unique capacity to spread hatred and disinformation. “No other Democrat’s supporters,” reports the Post, “are engaged in behavior on a similar scale, which is more characteristic of the online movement galvanized by Trump.”

That’s the way you start to win.

I sure hope we see the last of Warren (who I used to like), mostly because I hate weak candidates who plead the virtues of their gender as the reason to win, and then fold like origami when their supporters get hit. Democracies that still function need to go back and read Elias Canetti’s Crowds and Power.

That’s the bible to win here.

Sanders trolls did not invent internet sewage. They are a minority of his supporters. Unlike Trump, Sanders does not overtly incite their corrosive incivility. Sanders is decent. But his core team need to be war pigs that prepare for the real fight against Trump.

The only thing that will win against Trump now that he has been cleared by the Senate majority and revealing in the full froth of Republican triumphalism and an economy that is outstandingly strong,
is rage. Well orchestrated rage. In this new form of democracy, only rage can beat rage. Preaching kindness and goodness – particularly the supine facile mildness that our own Prime Minister pipes up with – is just fucked.

It is important to distinguish between mindless bullying and ardent
support. Sanders’ adherents have some reason to dislike the status
quo—for instance, the rich Democratic bundlers they understandably
despise, who often expect to purchase obeisance from their candidate.
And the outpouring of small online donations to Sanders is healthy for
democracy.

Sanders needs the same kind of fever swamp as Trump has carefully tuned for six years. That’s the only way the right will respect the left again – because Republicans know that is the way to win over and over and over again. Fuck virtue and fuck restraint. Probably only Sanders’ supporters have the mongrel to do it.

This is the wrong time to worry about a President Sanders having little hope of passing most of his agenda; or that in advancing his own agenda a President Biden or a President Buttigieg would have to please a party whose center of gravity is moving left.

Quite reasonably, sentient Democrats worry that, should Sanders lose the nomination, a significant segment of his followers will refrain from voting in November—or actively boost the next Jill Stein. Non-sentient activist majorities don’t give a damn.

Righteousness and victimhood carries your candidate a fair old way. Grudge is good. Trump’s success out of political nowhere tells you that. It just may be Sanders is the reliable outsider that perfectly mirrors Trump:

It’s worked before, if the Dems are already for it.

With some justice, moderates see the way that Democrats flipped the House the 2018—running moderates in swing districts—as a prototype for an Electoral College win in 2020. None of the Democratic Party left movements won anything of note. Maybe party insider officials are too frightened to say that Sanders is too extreme. Because it forces unity, fear works quite well both inside and out. Like the NeverTrump faction of the Republicans, Dem-moderates will matter less and less as we head to Convention. Fear is the key.

Sanders supporters may well be happy with an Iowan majority of a few hundred votes. But even the gap between Bernie’s votes and Biden’s is about 20,000 votes. For comparison’s sake, the average attendance at a regular season Cubs game is about 38,000. It’s a bit early to start hyperventilating on inevitable surges to victory.

Part of the party’s unspoken dilemma is that Sanders has never been truly tested as a presidential candidate, a point that his opponents in 2020—like Hillary Clinton in 2016—refrain from raising for fear of infuriating his followers. Asks Dartmouth political scientist Brendan Nyhan: “How do you warn your party that its potential nominee is vulnerable in a general election without sinking your own campaign?”

Answer: if Trump can do it, so can Sanders. Trump is the Overton Window for Sanders and Trump has made him viable.

The Democratic Party face a vetting problem about as big as that which they forgot to have with Hubert Humphrey and George McGovern. They won the Convention, then Nixon just smashed them after all the hidden stories came out.

How many Americans know that Sanders is not just an avowed democratic socialist but a former supporter of the Trotskyist Socialist Workers Party, which wanted to abolish the federal defense budget and supported “solidarity” with revolutionary regimes like Iran’s and Cuba’s? Do people know that he spoke positively about Fidel Castro and the Cuban revolution (“a very profound and very deep revolution”) and even praised the Soviet Union and criticized the United States during a honeymoon trip to the USSR?

The good news is on all of that: Trump has had far worse outed and come out just fine. In fact, they’ve just had a massive investigation over a year and then a further Senate trial. If you were a voter employed by any of the US military or intelligence families, whose name would your pen hover over?

Trump emerged stronger from both investigations. A Sanders President will get the same treatment.

Closer to Conference, this is what to watch for:

All the lessons Corbyn failed on.

At this point, winning Convention will have hard tactical lessons, but that’s the fight he and his supporters must deploy in the unseating of Trump.