Way back when I was fighting Paula Bennett, the then Social Development Minister, in the media, Labour made a lot of noise about trying to effect a cultural change at WINZ. I know they were in opposition, so I’m kind of not surprised that went nowhere – but what about now?

When my story did the viral thing and I ended up in the media talking about how I and others are treated by WINZ, a lot of politicians were suddenly very interested in what I had to say (as if it was anything new).

Maryan Street, who was Nelson’s Labour MP at the time, was very helpful – but only for me personally, and only then.

A lot of people got in touch with me to share their own WINZ horror stories. Labour’s Sue Moroney took advantage of this to launch a “story collector” on their website. She was hoping to collect and collate all of the anecdotal evidence about the systemic failure and bullying culture at WINZ, and use this as data to press for change.

Not long after that, Sue made way for Carmel Supuloni. I have sent several enquries to Carmel since 2014, and none of them have been adequately answered.

I feel extremely bad about it, because I encouraged vulnerable and disenfranchised people to give up their stories for this cause, so it was my name on the line. And as far as I know, none of those people have ever received a response. So it was just another time when they and their extremely difficult concerns were not acknowledged.

I recognise that Labour was in opposition and as such had limited capacity to push through any real change.

But now they’re the government – and I haven’t seen much discussion about their social development policy, which actually does have some hopeful things in it. 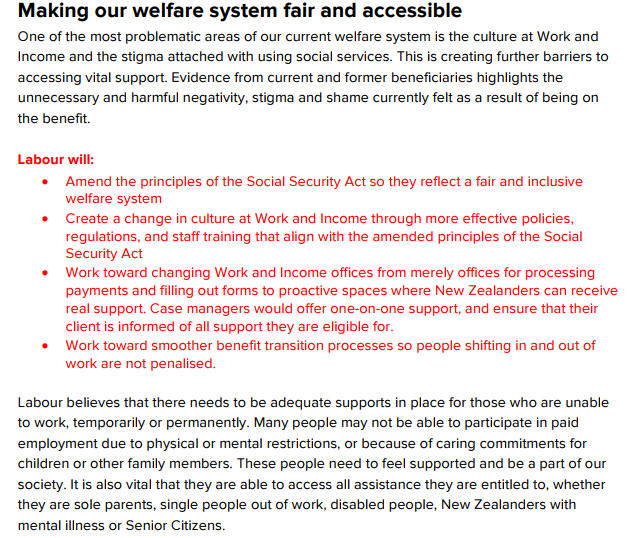 There’s some crossover with the list of promises made by the Greens in the leadup to the election, which is encouraging.

It’s really hard for me to articulate how much these changes would mean for so many people. I know they seem out of our reach – but they’re not. Not if Labour commit to them, or even some of them. And yet I’ve seen nothing about benefits apart from the Winter energy payment thing, and WFF stuff, from them since they took over.

That scares and disappoints me. It makes me think they’re going to fall back on exactly the words they’ve used above “National ruined things for nine years” “This is in keeping with global trends” – to which my response is: I don’t care. You have a massive opportunity here. Yes, we’ve been in the dark for nine years – and before that. Don’t leave us here.

So many continue to live under a system that treats us like criminals and demands that we constantly prove otherwise.

Yesterday, I wrote about how I’ve received four letters this week, each telling me I need to complete different steps in order to keep receiving my benefit. As well as visiting my doctor and filling out a bunch of forms, I need to have a phone appointment with them. Here’s what I’m told will be discussed: 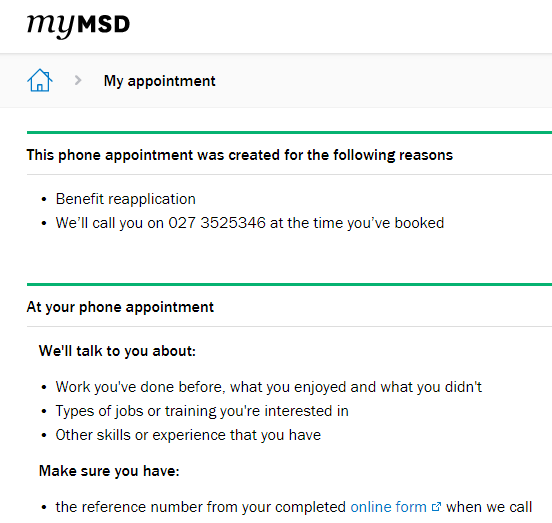 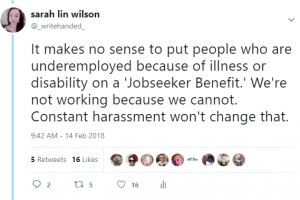 Any time I try to bring up the issue with treating sick and disabled people the same as unemployed people, I will get a bunch of people yelling at me that I should be on the Supported Living Payment. So I’m just going to stop that right here.

The SLP is generally designed for people who have longterm disabilities (very interested to see if Labour changes this), and it is extremely difficult to get. I have applied, and I was turned down. Despite letters from my GP, WINZ decided they knew better. I was informed that I could contest the decision, which would result in my being sent to a WINZ-selected doctor for a second opinion.

I’m pretty sure you can tell that that is not going to go in my favour.

Which means that, every three months, my doctor has to provide another certificate that says the same thing. “Sarah is still sick with incurable arthritis. Sarah cannot work. Yes, she is trying to get better. Yes, she’s doing everything she can.” It’s such an incredible waste of resources, for everyone involved.

You better believe I’m going to be watching like a hawk to see what, if anything, gets implemented out of this social development policy. Some of it is good words, but that’s all it is – words. And I, and so many New Zealanders, have been burned too many times before.

Time to step up and stand beside our most vulnerable. Let’s go.

Sarah has since been granted Supported Living Payment.