So, the other day I was arguing something around $100 a barrel oil equals a global recession. I wanted to get more precise: is there a certain price of petrol in New Zealand, above which the economy goes into recession? It turns out there is, and we’re well above it. The political implication: the best way to promote growth is decrease our oil dependence.

I took the MED’s petrol data and got the average price for 91 in each quarter since they started publishing the numbers in 2004, inflation-adjusted, and compared it to the GDP growth rate. The link was strongest when I lagged the petrol price by a quarter, which makes sense because it takes time for changes in petrol price to change consumer behaviour and other prices. 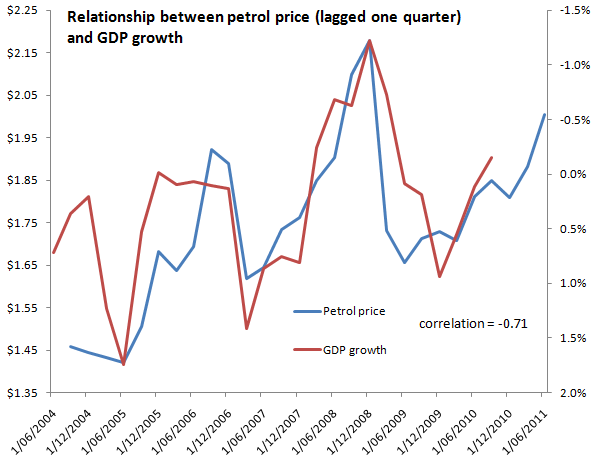 As you can see, the prices we’ve experienced recently suggest that there will be recession in the December through to June quarters, even without the Christchurch Earthquakes and the fallout from the Sendai Earthquake (which will be significant). And recession will continue until (if) the petrol price gets down to a viable price.

This is a scatter graph, each dot represents a quarter giving the growth rate and lagged petrol price. 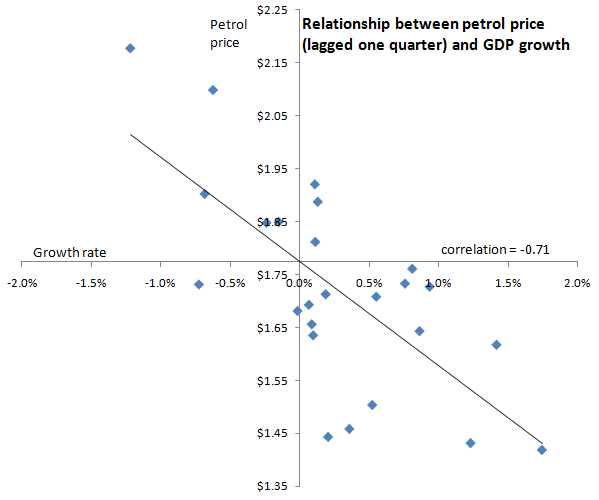 The formula for the trend line crosses zero at $1.77. Of the 8 quarters in which petrol has averaged over $1.77, 5 were followed by a quarter of recession and the other 3 were followed quarters with 0.1% growth. Of the 17 quarters where petrol was below $1.77, the economy shrank once in the following quarter, was flat once, and grew 15 times. The correlation is -0.71, which is strong.

Although there’s not a lot of talk about this in the msm, I think it’s pretty obvious that the price of petrol can induce recessions at what, now, seems like quite a low level. The average household consumes 35 litres of petrol and a couple of diesel every week. That means a 10 cent a litre rise sucks $200 per year out of the average household budget and $300 million out of the total budget of households. That means $300 million less consumer demand for other things, meaning less economic activity. $300 million is 0.15% of GDP, so that’s a guide to the direct hit to the economy from every 10 cent petrol rise without even counting the extra cost of freight transport, which probably doubles the effect since as much imported oil is used for diesel as petrol. It doesn’t take too much to work out that when you keep taking 0.15-0.3% off GDP with every 10 cent rise you reach a point that outweighs ‘normal’ growth.

Now, a petrol price of $1.77 equates to an oil price of about USD$80 a barrel. Anyone expecting oil to go down below $80 and stay there in the future? Nah, me neither.

A pro-growth political party should pay attention to this. They can’t influence petrol prices (apart from unsustainably cutting tax every time they rise, and that just necessitates rising tax elsewhere) but they can help households and freight companies consume less of it, which means the economic damage of a price rise is decreased.

A pro-growth party in the age of peak oil should concentrating their efforts on providing alternatives to oil and decreasing dependency on oil. And there’s an obvious suite of policies for that: no more motorways, more public transport, rail and coastal shipping to replace freight, ending sprawl and creating walkable communities.

Huh. Somewhat ironic that ACT, the most growth opposed party, is resorting to race-baiting while that the Greens have the most pro-growth economic policy.