On friday I noted to myself that in our long tradition of marking comment milestones that I should write a post about a milestone in comments by the end of the weekend. So belatedly, here it is…

Eddie predicted back in December 2012 with that we’d hit 600k comments on the 6th of August 2013. He was slightly out as it was a comment by Rosetinted on the 3rd commenting about another commenter. But so far Eddie’s other prediction looks like a safe bet

Comments are the lifeblood of this site because that is what the site is designed to foster. We’re not particularly interested in being the voice of a single egotist and their sycophants like some other popular sites.

We’re interested being part of the arguments because in our opinion that fosters the crucial and required participation in the political debate. Those active discussion is often largely lacking in the political parties (and especially in their caucuses) as they tend to get over focused on the mechanics of winning elections and the short-term feedback of internal polling. They seem to fail to realise that what they want to use the treasury benches to do and communicating that, is often the key to winning the votes of the cynical citizens who usually rate politicians as less trustworthy than used car salesmen.

Critical and robust debate is also  (with some notable exceptions) largely lacking in our media, who often sound very similar to a sounding board of popular myths, unthinking bigotry, and simple reflections of the PR specialists who provide it.  You really only have to look at the really stupid pontificating that goes on about political polls  to understand exactly how simple many of our political media are.

So most of our ever shifting body of active authors are drawn from our active and most wide ranging of our commenters. Their job is to argue their opinions. Commenters are welcome to argue for or against it or even to drift into other areas. Because that keeps the debate keeps growing and widening and teasing out the political and social options of society for our ever increasing numbers of lurkers to read.

Sure you get commenters vehemently and disagreeing with the post authors arguments and rudely refuting each other in a robust debate. It usually isn’t polite and nor is it academic. It isn’t intended to be. There are sites around that already do that in a gentile fashion. You’ll find many of them in our side feed along with the satirists and quieter opinions.

Politics is inherently about conflict and disagreement over the use everything from the way resources get used to the moral compass that society should follow. So we intend to provide a forum where people can get involved in that kind of debate. It is usually quite a lot of fun for both the participants and the ever increasing numbers of lurkers who read but don’t often participate.

This is all done within a loose policy framework that is designed to both foster robust debate and to ensure that stupid behaviour at the bounds is severely discouraged.  It is largely modelled on the way that our legal system tends to operate in actual practice – clear rules but with a rather arbitrary and often unfair justice. For the much the same reasons that our citizens don’t want a overbearing law enforcement system leaning over their shoulder  and watching their every move, the moderators don’t try for a sparrow’s fall style of policy enforcement. Neither we, nor the GCSB or police should try to attain that kind of community coercion.

It inhibits the open discussion that a free society needs for social change for the type of political behaviour that has ranged from abolishing the property rights of slavery to attacking brands for unethical behaviour. A better approach is to allow people to knowingly take the risks within a known framework of our local law and to take action once a actual offense is actually observed.

But I’m more of a numbers person than a philosopher, so here are some graphs explaining what it happening in comments that lead on from the graphs in my December post 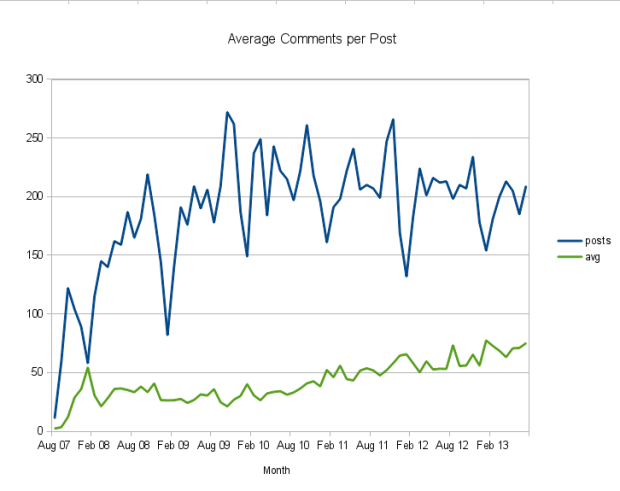 As you can see, we have been doing averaging 200 odd posts (with comments) per month for a number of years. It jumps around a bit based on christmas break, elections, and when a news series gets active. This winds up as being a nice quantity of posts for the readers as it means that the posts don’t scroll out of view too fast. 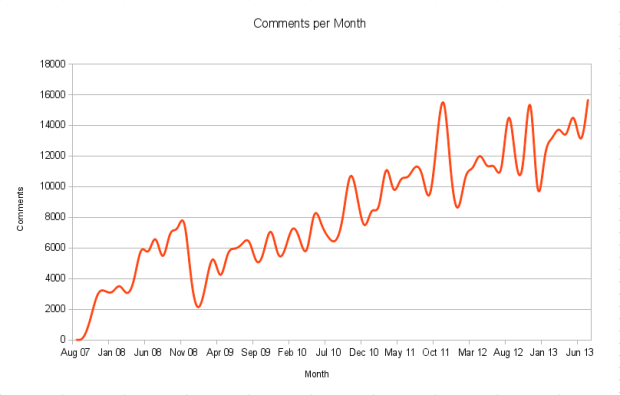 We get some obvious spikes leading into the elections in November 2008 and 2011. But we keep rising and start routinely doing the similar numbers to election months a few years later. Like right now.

In July we got more than 15 thousand comments which we have only previously hit during the 2011 election. We averaged more than 75 comments per post on average – helped in particular by a post that had more than 700 comments.  There were  5,667,036 characters types and about 922 thousand words (the algorithm used to calculate this is a bit flakey).

Of course (in another long tradition) our very success also revealed more technical issues. The volume of comments coupled with a new database caused a problem with the database not coping with simultaneous comment posting, and last months total includes 98 duplicates that I have to figure out how to clean out (without disturbing comment threading)

A pretty good effort commenting… And later this month on the 20th, The Standard turns 6 years old