Issues surrounding Trevor and his role as speaker of the House have been bubbling away for a while.

The background is a frankly toxic workplace that we know as Parliament.  For decades it has not been a safe place for workers. There is too much concentrated power and too many egos present for a normal civilised workplace to exist.

Trevor Mallard knows this.  He has made a concerted effort to change the tone of the place.

For instance he thinks it should be a family friendly place.  New mothers ought to be able to look after their babies and continue to work if they want to. 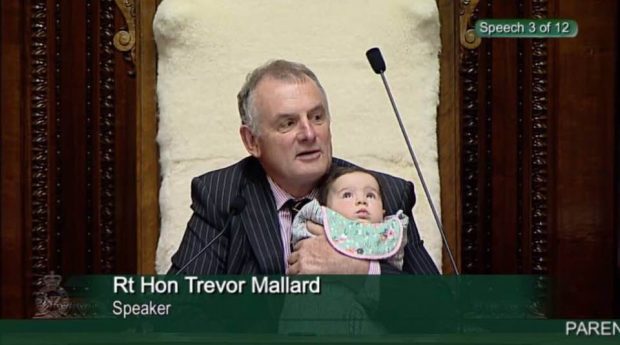 He attempted to address the toxic nature of the place by calling for a report from External Consultant Debbie Francis.  Her report was incendiary and for some it was cathartic.  One person’s comment on the report, recorded at the beginning of the report, said this:

My hope from the Review is we actually do some things to change this place for the better. I hope it’s not just all talk. We can be better. We have to be better, for democracy’s sake.”

Francis’s primary conclusions were these:

While writing the report she received 14 allegations of sexual assault occurring in the precinct.  Her report rightly recorded that these sorts of allegations tended to be underreported and the actual frequency of these sorts of incidents is normally higher.

After the report was released Trevor Mallard said that a staffer had been stood down and a “threat to the safety of women” had been removed.  He also, unwisely, said there was a rapist on the premises when it appears that the allegation was one of sexual assault.  And even though it appears he discovered this was an overstep he did not immediately walk the statement back.

All sorts of legal action then took part.

Clearly Mallard overstepped the mark in calling the person a rapist.  This brought back memories of Helen Clark describing John Yelash as a convicted murderer.  She should have called him a convicted manslaughterer.

An ex gratia payment has been paid to the person.

National has gone to town on it and raised the matter regularly.  They have required Trevor Mallard to appear before Parliament to answer questions, which he did.  They have also continuously asserted that he should resign as speaker.

It is interesting they should choose to litigate a situation that is traditionally difficult.  Who do you back?  The guy who lost his job he complains because of a breach of natural justice or the woman who has complained that she has been sexually assaulted.  Deft sympathetic steps are required in handling this sort of situation.  I see no evidence of these steps being taken.

Jacinda Ardern was not pleased about the tone of the debate that happened last night in Parliament.  And she is right.  From Newshub:

“The serious issue of alleged sexual assault and harassment at Parliament was poorly managed and inappropriately politicised last night. The tone of the debate did not reflect well on Parliament as a whole,” Ardern said in a statement on Wednesday.

“Any investigation of claims of sexual assault should be in a manner that takes a victim-centric approach. It also needs to include principles of natural justice for the person allegations are made against.

Ardern said she spoke with Mallard on Wednesday morning.

“He retains my overall confidence; however I have expressed serious concerns to him about the manner in which he conducted himself in the House last night,” Ardern said.

“It did not meet the standards I expect. Nor do I consider it to have met the needs of the victim in this situation. The Speaker acknowledges he did not meet his own standards either.”

“Issues of this serious nature should not be litigated in Parliament in such a manner. It was wrong. Parliament rightly needs to set standard for others to follow.”

Jacinda is right.  Parliamentary privilege should be preserved for the most important of situations.  Not a testosterone driven battle for supremacy between MPs.

Trevor has been working really hard to improve things.  Parliament right now is a lot better place because of his efforts.

Please do not comment on the identity of any of the persons involved in the complaint.

67 comments on “About Trevor Mallard ”