Anatomy of a failed coup America’s descent into chaos was almost completed yesterday.  An amazingly inept display by local police saw a takeover of Congress and a temporary disruption of the confirmation of the clearly expressed view of the majority of Americans.

Thankfully the opposition was a rabble and completely unprepared.

We spend $750 billion annually on "defense" and the center of American government fell in two hours to the duck dynasty and the guy in the chewbacca bikini pic.twitter.com/ZMR76cbN2c

And people are wondering if the fuck up theory actually applies on this occasion.

Chuck Schumer, soon to be Senate majority leader, has pledged to fire Senate Sergeant-at-Arms Mike Stenger when as soon as he has the power to do so.  And Bill Barr has accused Trump of orchestrating a mob to pressure Congress.

It is not as if Trump’s involvement has been hidden.  As just one example telling Proud Boys to “stand down” two months ago suggests that he viewed them as his own private army.

Yesterday he urged them to march on Congress and his lawyer Rudy Guliani talked about “trial by conquest”.  Over the past few weeks he has obsessed over the thought that the election has been stolen from him.  This is despite the overwhelming response from multiple states and courts that no such theft occurred.

And in Congress various Republican representatives tried to allege that the whole thing was a deep state conspiracy involving Antifa operatives, not a rabble of fascists who despite themselves almost succeeded.

The whole “movement” has been a mishmash of weird conspiracy theories and the twisting of concepts beyond breaking point.  Trump is their natural leader.

The potential violence was huge.  One protestor was pictured with ties, obviously with the intent of taking hostages.  Guns were present and two pipe bombs, one for the DNC and one for the RNC were discovered.

Social media finally shut down Trump’s social media.  This caused the most bizarre tone deaf responses from National aligned social media and  a wannabe National MP that I have ever seen. 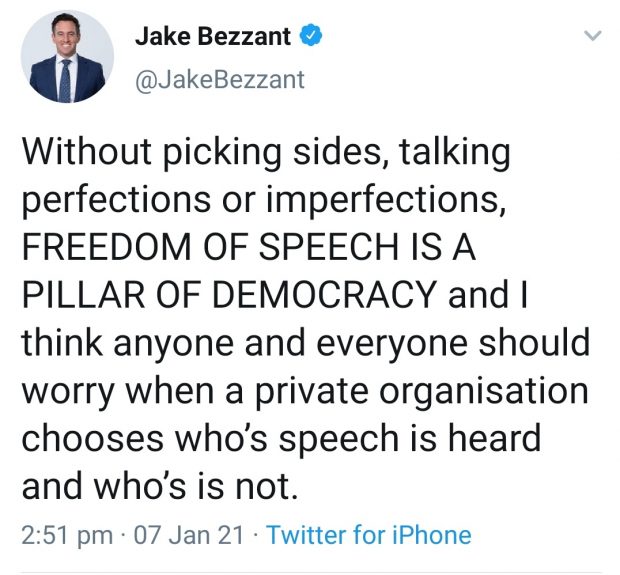 Or how about this as an example of a totally tone deaf example of false equivalence.

Trump still has the nuclear codes.  If his cabinet has a spine they will remove him from office using the 25th amendment of the US constitution.