Children: the pandemic has only just begun

I’m always intrigued at the capacity of most humans to be self-delusional in the way that they favour to believe regardless of facts. Nothing else could explain the delusional idiots like David Farrar and his mischievous minions like Sean Plunket and Heather du Plessis-Allan wanting to go back to their business as usual – their ministerial scalp collection.

It also appears in the odd statement and comment wanting to drop the lockdown sooner rather than later. Their presumptions about relative economic damage of the lockdown compared to letting the virus rip through the healthy younger parts of our workforce show a serious disconnect from reality.

Oh well, I guess I’ll have to point out the obvious level of dumb stupidity. But first lets review the global situation..

While New Zealand has, so far, we’ve appear to have been pretty good at making sure that we have contained, for the moment, the spread of covid-19. But that just puts us in the middle of the pack. Have a look at this New York Times article on reported cases. Obviously there will be some testing discrepancies. Then you look at the outbreak countries.

The charts are not without limitations. Each country may have different reporting guidelines, which makes precise comparison among countries difficult. Some countries may be less proactive about testing or reach a limit in their ability to test, which could cause their numbers to be understated.

Still, these charts provide a way to measure the overall trajectory of the coronavirus in each country and give insight into which ones are far from controlling the virus.

All of these countries below have seen an average of more than 2,000 cases per day in the past week, and most of them are not showing any signs of a slowdown. Basically there is no real difference between the progress of reported cases in most of the countries. Mostly rapid climbs, occasional signs of drops – like South Africa or Taiwan or Lebanon, and signs of outbreaks after a drop or constraint as the epidemic gets out of control again – like Japan. 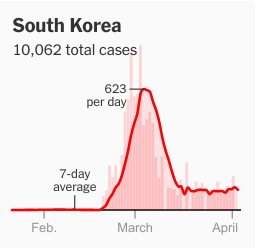 The only real sustained differences are for China and South Korea, both of whom currently appear to have constrained the outbreaks for significiant .

They have a distinctive shape. Sustained drops with potential outbreaks being constrained.

When you look at the detail about who is getting sick and why, then the best place to look right now is in New York with its transparent reporting. For instance this BBC article “Coronavirus: The young doctors being asked to play god“. My italics, but I see this kind of report out of all of the hotspots worldwide.

And this medic, in her early 30s, tells me the stress is intense. Nearly everyone who arrives at the ER needs to be intubated and put on a ventilator. That would normally be a job done in the Intensive Care Unit. But they are overloaded.

These people need “pressors” – meds that will keep blood pressure up. And that is a job normally done by specialist nurses. But there aren’t the nurses to do it. So people who are untrained are having to do it. “How can I not worry when there are patients not getting the care that they need?”

And she says it is not just the old who are falling prey to this. “There are patients in their 30s and 40s with no pre-existing conditions. Equally, we had a 90-year old man the other day who was brought to the ER after he had fallen at home. He had a broken leg – but he also tested positive for coronavirus – even though he was exhibiting no symptoms.”

It is a confounding virus, is Covid-19.

So when I see calls like this following comment, I really have to ask why the media reporting in NZ is so poor that this mindless ignorant fool simply doesn’t understand the risks to our economy they are calling for.

The facts in NZ are:

Nearly 1000 cases, one death, a handful in hospital with the numbers decreasing.

The one death was from someone in the high risk group.

The evidence here is that for the vast majority the disease is relatively harmless. It seems reasonable to assume the reason that we don’t have more serious cases is that the vulnerable groups are benefiting from the general self-isolating, and hence not getting sick.

Taking all this together, wouldn’t the sensible thing to do be to isolate the at-risk people, and let everyone else get on with getting the economy running again?

Which ever side of the political spectrum we are on, surely we should all be concerned about the massive loss of jobs, and want to see the current situation loosened as quickly as possible.

I am not meaning stopping all the measures. Rather we should increase the testing, and isolate any sick people. And also isolate the at risk people. Then let everyone else go back to work.

Now there are so many false understandings in this comment, that you have to wonder what sewer he has been hiding it. Probably kiwiblog where out many of our most deluded dimwits live in NZ.

Basically this was a line being spun a month ago before the evidence of how the disease actually operates in population who know about it came to light. It isn’t the unexpected onslaught that we saw in China or Italy where the disease spread well before detection.

If you look at where the outbreaks have been happening recently – the people who are most at risk are mostly the healthy and mid-age who are still working. That is because in places like the US, UK, Germany or here, the vulnerable and aged have generally self-isolated themselves. People without adequate support systems like the US have left their people working in a stew of ever increasing exposure levels. So when they get exposed enough, their immune systems can collapse and they get sick.

Only a simpleton or someone extremely resistant to reading could still think that there is no risk to children, teenagers, 20s, 30s, 40s, or 50s. But I guess there are still some of them around. While it may be a lower probability than the over-60s, the probability is still there. And as the level of virus load in the population increases, so will the number of younger people having their immune systems compromised.

We don’t even know for sure yet if the auto-immune responses actually do activate enough to prevent reinfection, yet this commenter wants to test that with most of the population of NZ.

In avy case, with each of these workers falling sick, there will be a pile more of their colleagues, friends and family having to self-isolate because testing can’t identify if they are infected until up to a week after they have been infected. As someone who has run a  number of workplaces – I can’t think of anything more damaging to the economics of the country of having workplaces going up and down like a yo-yo.

Talking about fools. You only have to look at idiots making potshots at Ministers of Health for something that has little to do with their job – like this fuckwit statement from Sean Plunket this morning – related only to David Clark going for a ride on a safe track on a offroad bike.

The question of this Minister’s removal is not a debateable point.

At a time when our government and authorities need to have a moral high ground and exercise an unimpeachable authority to ask great sacrifice of citizens this Dr of Theology’s fall from grace is beyond redemption.

Of course it is debatable. Changing ministerial coordination in the midst of a pandemic is a potentially major problem when we haven’t gotten near to controlling the epidemic here. Plunkett should take some time to read the history of exactly how much the lapses of control by key people during the epidemic in 1918 crippled the ability to

What isn’t debatable is that Sean Plunkett is an idiot who really should be fired as being a paper weight in a crisis. Too stupid to actually understand the risks. Too irresponsible to avoid doing unnecessary harm.

But then again, I think exactly the same about my colleague who made the same call in a post yesterday. When I finally read his ridiculous rant, I couldn’t find a single reason that I could recognize in the post why David Clark should have been fired apart for some kind of simpleton moralistic bile. Basically the same rant that Sean Plunket repeated.

Or David Farrar with a similar level of cabin fever and hobbydom. Look at this pile of false equivalences yesterday on testing. Remember that what he is talking about is the nationwide testing capacity in an environment when air flights are extremely limited. And then he compares national tetsing levels to testing at a very local area a long way from other testing labs..

It is simply nuts that the Government keeps saying we are only testing at 50% of our capacity and that we want to test, test, test yet 50% the Southern DHB lab is refusing to test 50% of swabs.

So he made that statement with absolutely no idea about what the actual level capacity of testing in Southland is. It isn’t in any of the material that he referenced. In all likelihood, since both he and the article referenced only the solitary testing lab in Invercargill, the tests were being rejected there because they didn’t have capacity to all of the swabs from local doctors. So they triaged them as they should do.

Nor did he apparently check the flights out of Southland to areas with a higher testing capacity.  It doesn’t matter how many testing kits are issued in a DHB area. What matters is the capacity in that area to process the kits.

Southland, because of a series of events, has a high outbreak number. So does Otago at a lesser level. That is why the Southern DHB has the largest number of cases in the county despite having a smaller population of 330 thousand. The Auckland DHBs of Auckland and Waitemata and Counties Manakau have  about 1.6 million and have mere kilometres of driving between their testing stations. The distance between Invercargill and Dunedin is about 360km. 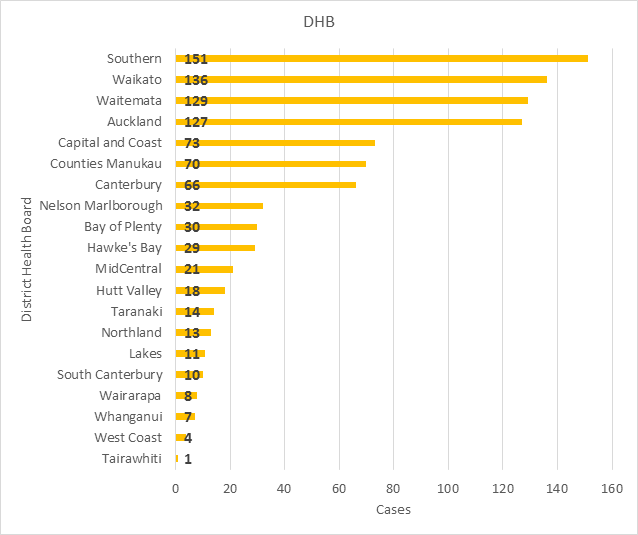 The point of the post appears to be the final paragraph.

For instance the administration of the Southern DHB is in Dunedin, which is where David Clark is. What good would he do ringing from Wellington that he couldn’t do with a local phone call.

David Farrar is another willfully stupid partisan idiot who doesn’t bother to check the available data. It is the kind of dumbass sloppiness that you come to expect when he is irresponsibly practicing mischief. More interested in his ministerial scalp collection than facts or the potential harm he causes.

All of the evidence to date is that where is sufficient level of infection and no lockdown, we get classic epidemic conditions. Everything spirals out of control overwhelming the medical systems. We’re not close to getting to the point where we can make a decision on how to start to end the immediate lock-down without causing outbreaks.

Could the children in the room, please take some time to educate themselves and stop being bored and mischievous? This is a serious outbreak – contain your boredom and hobbies until we get over it. Otherwise you’ll just cause serious harm to yourself and others.

113 comments on “Children: the pandemic has only just begun ”