Crossbreed a dumb mistake with wingnuts 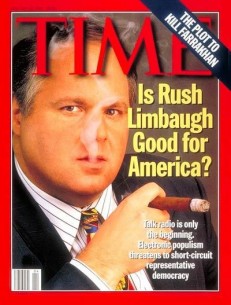 Check this out; fuckn hilarious.

I’ve been predicting it for ages, but if the health care bill passes, it may well trigger peak wingnut.

The post “Alert the patriots: Tyrants are ruining our country!” at a US political blog Swamplands details the hilarious results of a mistake by a media wingnut

On Wednesday, Rush Limbaugh told his listeners to call Congress and tell them to vote no on health care reform. That’s no small thing. With his millions of fans, this is the kind of advice that could crash the congressional phone system.

But Rush made a critical error in his activism…

He gave his listeners the number for a pro-healthcare reform lobby group FamiliesUSA. This had a message for ideas to talk to their representatives about, then it connected to the capitol.

So many Rush fans called the FamiliesUSA number on Tuesday that it caused a massive spike in call volume, which was immediately noticed by the group’s telephone re-routing vendor. Not wanting to pick up the tab for anti-reform calls, of course, FamiliesUSA immediately shut down the number and got a new one…

But Rush’s callers didn’t understand this whole re-routing thing and many were absolutely and astoundingly enraged. Many of them assumed the pro-reform message they got was a left-wing conspiracy to take over government. Think this is a stretch?

Here’s a Youtube video posted by one such caller, who believed he had discovered a blatant case of ‘Obama propoganda Alert the patriots: Tyrants are ruining our country !’

The video has now been removed by the user. But the stupidity continues.

He’s not alone. After FamiliesUSA turned off their original toll free number, it was bought by someone else who must have known about the mixup. That new person put a pro-reform bulletin on an answering machine and recorded messages left by angry and I mean very angry Rush listeners. WARNING: Many of the message contain obscenities they can be accessed by calling 206-666-6666.

Readers of these pages will be well aware of the breed. Supposedly intelligent people who get some strange ideas fixed inside their heads and will repeat them ad-infinitum regardless of any evidence to the contrary. Immediately jumping to the bad conclusions based on a dog-whistle from one of their gurus. Against rational argument while insisting that their unsubstantiated opinion is the ‘real truth’. Perpetually after the rush of getting angry about something, in fact damn near anything will do.

6 comments on “Crossbreed a dumb mistake with wingnuts”