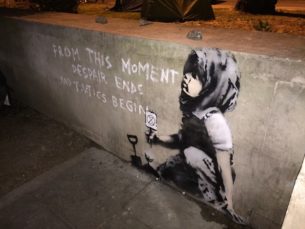 The establishment has always had a problem fighting back at a faceless, nameless, amorphous enemy. This becomes clear when faced with a groundswell of community pushback and civil disobedience practices by grassroots movements.

Throughout human history (am I starting to sound like Mr Trotter?), civil unrest and revolutions were nipped in the butt by neutralising the leader(s). However, when a movement is practically leaderless, the usual tactics of cutting the head(s) off, sometimes literally, are ineffective.

Neutralising usually starts with separating. Branding activists as “radical extremists” or “terrorists” is an age-old tactic to drive a wedge between them and the general public that might be receptive to and supportive of the cause.

Knowing the people behind the action not only reveals their motivation and agenda but also provides you with a target(s) to aim for – it exposes the proverbial underbelly. This could be their ethnical background, their religion, their sexual preferences, their social class, et cetera, in short, their identities. Importantly, it allows you to find ways to cut off their funding source too.

Fighting back at an anonymous enemy is much harder and relies much more on projection and sticky labels. Some fine examples of this can be found here on TS too.

The least preferred option is to meet the enemy on their chosen battleground and fight them with their weapons of choice. That is to say, rarely is the debate fought on the merits of arguments and the veracity of facts and evidence. We have seen this with the tobacco industry, the oil industry, and now with climate change.

Extinction Rebellion has been working hard to get NZ Councils to declare a Climate Emergency. This is no easy task as Robert can attest. They have recently written a letter to the South Waikato Council, which has been met with an interesting yet predictable reaction by the Mayor and Councillors.

One dinosaur said that he supported the aim (only one?) of Extinction Rebellion but he objected to their “extreme ways” of messaging:

The press call them activists but I call them terrorists.

Way to go, Pete! So, you support their aim (singular) but because you call them “terrorists”, you have to withdraw your support? I admit that writing a letter is pretty ‘extreme’ and I’m sure they ‘violently’ pressed the send-button when sending it. Have you notified the Police yet?

Another dinosaur said he was “loathe” to support the group if he didn’t know who was behind it.

We don’t know who these people are,” he said.

“There is no incorporated society behind it and there is no trust behind it. In other words there are no responsible people behind it.

Fair enough. If you don’t leave your name, address, and contact details, they cannot contact you and get back to you. For all they know, you could be a law-abiding ratepayer or a raving lunatic, which is a big difference when dealing with a reasonable request. Obviously.

Names cannot be withheld when citizens and ratepayers participate in political and democratic processes and submissions only have merit when you have paid all your bills and taxes on time. Obviously.

By their names, we shall know them. The others who cannot be named shall be known as the irresponsibles. How responsible of these dinosaurs.

I think these legalistic leg-overs (AKA fuckwittery) are solely intended to create a Kafkaesque labyrinth of denial and obfuscation with the ultimate goal of completely ignoring the actual message or request.

If this is how the dinosaurs amongst us deal with the existential threat, they will hasten not only their but also our extinction. My advice: do not feed the dinosaur. In other words, do not vote for this dying breed – it doesn’t take a palaeontologist to see that the fossilisation process is already well underway.