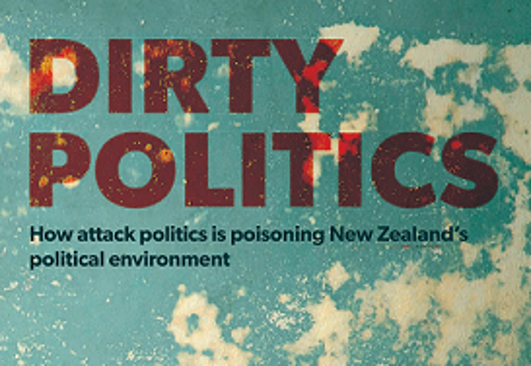 Another chapter of dirty politics has reached its conclusion with Carrick Graham offering an abject apology to Doug Sellman, Boyd Swinburn and Shane Bradbook for smearing their reputation via the Whaleoil website.

The details of the alleged defamatory comments have been suppressed but it has been reported that Slater has been alleging that Sellman Swinburn and Bradbook are “troughers” “rorters” and have been “ripping off” the public purse.  Sellman and co are public health professionals engaged in research concerning the adverse effects that too much sugar is having on our diets.  For previously unknown reasons this attracted Slater’s attention and he made all sorts of allegations about their competence and motivation in a number of blog posts.

The book Dirty Politics suggested that this was no random drive by smear but a professional hit paid for by Rich and the Food and Grocery Council.

You get the feeling that the statement drawn up and read to the Court had a large dollup of utu used up in its drafting.  From Alex Braae at Spinoff:

Opening arguments started today in the socially distanced Auckland High Court, but the court was adjourned for discussions to take place between the parties. After a lengthy break, Graham’s lawyer Chris Patterson returned to read the public apology.

“Mr Graham made various defamatory comments about the plaintiffs using various pseudonyms on blogs published on Mr Slater’s Whale Oil website. He encouraged, inspired and contributed to the text of certain defamatory blog posts about the plaintiffs that were published on Whale Oil, including making payments to Cameron Slater,” Patterson told the court.

“Mr Graham did so as part of his business, and in order to advance the interests of industry. Mr Graham apologises for the hurt and harm caused to the plaintiffs by these blog posts and comments.”

Patterson said his client was “now aware that a number of statements that he made about the plaintiffs were untrue, unfair, offensive, insulting and defamatory. Mr Graham acknowledges the plaintiffs’ work on the harms of tobacco, alcohol and processed food and beverages was undertaken responsibly, and in the public interest.”

David Fisher at the Herald has outlined how the various postings were motivated by cash, and details the allegations made in court that Graham may have not been entirely truthful during the proceeding.

Graham had said on oath: “I have talked and shared information with (Slater) on the basis that it might contribute to his knowledge or understanding of an issue. I have never procured nor instructed the first defendant to publish a blog post. The closest I have come to ‘requesting’ a blog post is communicating with the first defendant ‘this would be a good story’.”

Salmon said: “The evidence will show that Mr Graham’s assertions are untrue.” He said Graham had paid Slater for posts which would benefit his public relations clients, including the FGC and British American Tobacco.

He said evidence showed Graham’s company, FCL, had paid Slater $124,430 between October 2012 and May 2016. He said neither Graham or Slater had “given any proper explanation of what services” were provided for the money, or to whose benefit those services were.

Salmon said there was also evidence the FGC had paid FCL $365,619 between November 2009 and July 2016 with invoices carrying “generic narrations”.

While there was evidence from Rich that she had not heard of Bradbrook, or the agency at which he worked, before the lawsuit, Salmon said the particular posts targeting the expert in 2009 and 2010 “were published for the benefit of BAT”.

He said Graham had not produced any invoices from BAT and there was a subpoena requiring him to produce them at trial.

Weirdly Graham objected to the Spinoff covering the case.

The defence had previously sought to block The Spinoff from reporting on the trial, on the grounds that Swinburn has written for the site in the past, and The Spinoff has had commercial arrangements with the University of Otago.

Those arguments were dismissed by Justice Tracey Walker.

“I reject the suggestion of implicit or explicit bias on the part of The Spinoff by dint of a commercial relationship. First, the mere publication of op-ed pieces by one of the plaintiffs in the past is of no moment. Secondly, there is nothing in the material presented to me which suggests that being a sponsor of media influences news reporting on that platform,” she ruled.

“I accept that sponsorship is the underlying reality of media funding in today’s environment and is analogous to advertising in the analogue media environment. The Spinoff is subject to the same fairness and balanced reporting imperatives as other media. I treat its application in the same vein as the applications by other media.”

Comparing the Spinoff’s treatment of important issues to the treatment those issues received on Whaleoil shows what a frankly bizarre argument it was.

It is good to see justice occurring.  And I am sure there is a pretty significant dollar amount attached to the settlement.