From the Uttermost Ends of the Earth 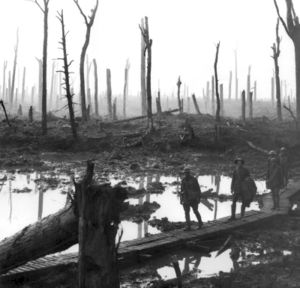 On the morning of October the 12th 1917 845 New Zealand soldiers lost their lives in a failed attack on Bellvue Spur during the Battle of Passchendaele.

At commemorations held in Flanders yesterday, Peter Kennedy, The New Zealand Ambassador to Belgium reffered to the attack of that morning “the greatest disaster in New Zealand’s history, in terms of lives lost in a single day”.

We Shall Keep the Faith
by Moina Michael, November 1918

Oh! you who sleep in Flanders Fields,
Sleep sweet – to rise anew!
We caught the torch you threw
And holding high, we keep the Faith
With All who died.

We cherish, too, the poppy red
That grows on fields where valor led;
It seems to signal to the skies
That blood of heroes never dies,
But lends a lustre to the red
Of the flower that blooms above the dead
In Flanders Fields.

And now the Torch and Poppy Red
We wear in honor of our dead.
Fear not that ye have died for naught;
We’ll teach the lesson that ye wrought
In Flanders Fields.

One comment on “From the Uttermost Ends of the Earth ”