Hit and Run – time for an inquiry 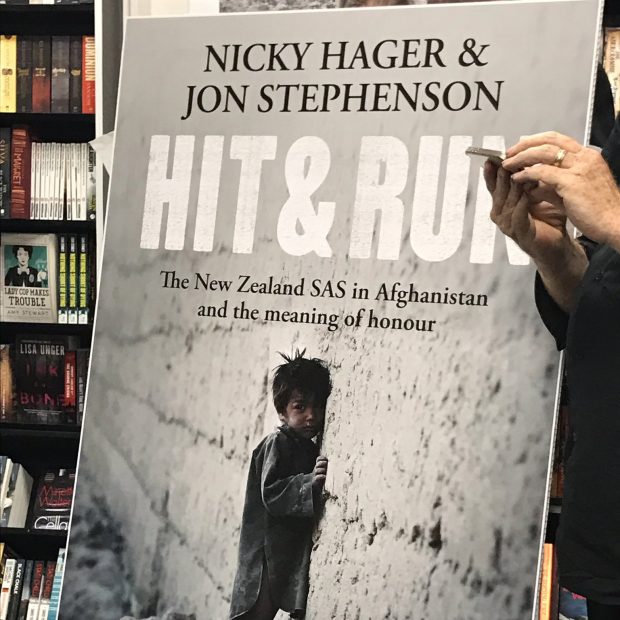 Hager’s latest book has now been released. My very initial response when I saw the subject was a slight degree of disappointment.  I was wondering if it would reveal the reasons why John Key resigned. It was about a military cover up, no overt politics, no salacious details of the evil things that National’s operatives have been doing.

But after a very short while it started to really hit. According to Hager, and I have many reasons to respect his judgment, New Zealand SAS forces were involved in the killing and wounding of innocent civilians. Men Women and Children.  People living in a land where New Zealand forces had travelled to and were meant to be engaged in the rebuilding of.  And then according to Hager they covered it up.

The book describes a series of operations which proved to be ill-conceived, tragic and disastrous. These included an SAS attack on two isolated villages in Afghanistan’s Baghlan province where they mistakenly believed they would find the insurgents who’d attacked a New Zealand patrol 19 days earlier in neighbouring Bamiyan. SAS officers commanded and led the attack, supported by US and Afghan forces.

The insurgent group wasn’t there. Instead, at least 21 civilians were killed and injured – many of them women and children – and the SAS and US forces burned and blew up about a dozen houses. The SAS also failed to help the wounded. The defence force and government then tried to keep the whole thing secret. They have never admitted nor taken responsibility for what they did.

In a second raid on one of the villages about 10 days later, the SAS destroyed more property. When they eventually caught one of the targeted insurgents in Kabul he was beaten before being handed to the Afghan secret police and tortured.

Fragments of the story have reached the public before but the vast majority has remained secret until now. It is much worse than anyone knew. As former chief human rights commissioner Margaret Bedggood says, there needs to be a full, principled and independent inquiry into the actions described in this book, which, if confirmed, would seriously breach international law.

Pundit has very well informed take on the issue.  Its group of authors coincidentally include Wayne Mapp, Minister of Defence at the time of the incident as well as Nicky Hager.  I wonder if their authors ever meet?

Tim Watkin has written this post where he concentrated on what the Government knew and what they had previously said about the incident.  He records this interaction between Guyon Espiner and Mapp back in 2011.

GUYON There’s an Associated Press report around that time that contains a claim that a number of civilians were killed during that operation.

DR MAPP And that’s been investigated and proven to be false.

GUYON So no civilians were killed in that? You’re satisfied about that? You’ve seen some reports on it?

DR MAPP I am satisfied around that.

GUYON Only insurgents were killed in that operation?

DR MAPP I am satisfied around that.

But this was subsequently contradicted in 2014 by then Minister of Defence Jonathan Coleman.  He was asked about the incident and did not deny that civilians had been killed, only that the SAS was not involved.  From Stuff:

Defence Minister Jonathan Coleman has categorically denied New Zealand troops were involved in the deaths of Afghan civilians in a 2010 raid.

But he could not rule out that deaths did occur at the hands of foreign forces.

Andrew Geddis has written passionately about the book and the incident.  His must read post starts off with this:

Now think of her screaming in terror as her mother carries her from her home while helicopters pour 30mm exploding cannon shells into it. Then think of her screams ending as a piece of shrapnel from one of those shells smashes through her skull and kills her.

For Nicky Hager and John Stephenson’s book, Hit & Run: The New Zealand SAS in Afghanistan and the meaning of honour, tells us in horrifying detail that this is what happened in a small Afghanistani farming village called Khak Khuday Dad early on the morning of 22 August, 2010. What sets this story aside from all the other sad, cruel deaths in that country is this small child – Fatima was her name – died because of us. Or, rather, she died because of the plans and actions of soldiers wearing our flag on their shoulders and our Kiwi on their vehicles.

And his conclusion is flawless in its logic:

Why, then, does any of this matter to us some seven years down the track? It matters first because we don’t yet know the answer to the most important questions: who ordered the U.S. Apache helicopters to fire into Khak Khuday Dad and why? Who fired the sniper shots that appear to have killed two unarmed civilians fleeing the burning village? Those matters require an urgent inquiry, for if it was New Zealand soldiers on the ground who did so, then our SAS actually has directly killed non-combatants. And directly killing non-combatants can be a war crime.

Second, the fact we as a people have been systemically lied to over what our soldiers do in our name is intolerable. Back in 2013, when it was revealed that the Defence Force included investigative journalists on a list of “hostile individuals” that threaten “subversion”, I said this:

I say that again now. If our SAS must dissemble and lie by omission or commission to those for whom they fight, then it should not be fighting. If military leaders and their political masters are complicit in those lies, then we should follow the German example and require their resignations.

Nicky Hager and Jon Stephenson should be congratulated in their work.  Their resilience to the attacks that this Government had made on both of them over an extended period of time is legendary.  They have performed a vital role in our democracy, they have refused to be silenced even though the full force of Government has been thrown against both of them and they have insisted that the truth is made public.

There needs to be an inquiry.  Call me old fashioned but I have always taken the view that if members of my country’s military have engaged in war crimes then they should be tried.  And if there has been a cover up then those responsible should be held accountable.

Hager’s book is going to cast a very dark cloud over John Key’s valedictory speech.  Rod Emerson’s brilliant cartoon from this morning sums up why.