I don’t give a shit about Hone. But the lynch mob is interesting. 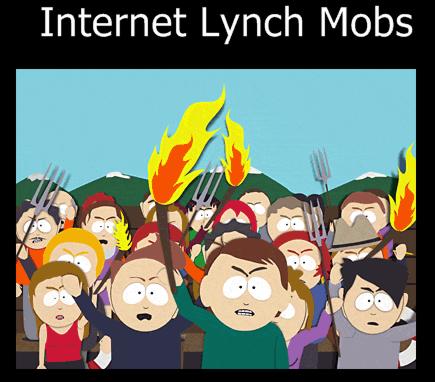 Whatever argument there is between the hierarchy of the Maori Party and Hone really doesn’t concern me. While I’m sure Kelvin Davis is watching with considerable interest, Hone was elected by the voters up north for being exactly who he is. This isn’t a political row with the over-powering stench of political hypocrisy like recent ones. It is just Hone doing what he has always done, telling it the way he sees it, in a private e-mail, that got dropped off to the media. The virtual lynch mob running around at present is far more interesting.

Political hypocrisy was the issue with the ‘perk-buster’ Rodney Hide and ‘government waste’ Bill English proving to have their snouts throughly pushed into the trough of what they’d railed against whilst in opposition. That has wider political implications about trust. The trust between our representatives and their voters is critical for maintaining a democratic system. For our representatives to knowingly say one thing in public while their hidden actions are completely different. Well that strikes at the heart of the trust between the ‘punters’ and politicians. That trust was the issue was with the e-mails in Nicky Hagers book after 2005, the Kees tapes in 2008, and the Hide and English rorting actions this year.

If having both public and private opinions that are coherent, consistent and conformant upsets the delicate stomachs of the faux outragers because they simply disagree with Hone’s opinions, then I really couldn’t give a shit. I have to wade through their equivalent comments here daily when moderating.

In Real Life, I hear opinions like this all of the time in all sorts of contexts. For that matter I’ve been known to hold strong opinions myself and I’m seldom backwards in sharing them. My opinions on trolls are well known. Less well known is my absolute boredom with listening to immigrants moaning about the way NZ runs. You can see this daily with some of the posters at No Minister who bring back memories of what used to be called “whinging poms”. Even the native born like my family sometimes have some pretty strange (to me) ideas about immigrants, the world and everything. Hell, you should hear how I frequently describe Microsoft’s software..

The difference between what people say and what people do is a critical component of the legal system and should be of the political system as well. The act is what is required first. To do otherwise would require that many in the south african ghetto in the North Shore should have their mouths stapled. In practice, you just wait for the various immigrant bigots to either leave or their kids to grow up as kiwi’s. Typically the kids wind up  wondering what in the hell their parents are whining about when it clearly doesn’t equate to what they see amongst their friends and fellow workers. It is pretty much the same while we wait for the local remaining victims of the simple bigotry of the british empire educational systems to fade out.

Hone may possibly be offensive and dumb, possibly racist, probably angry, embarrassing, or go too far as some of the varying opinions in posts here assert. I simply don’t care. There is no particular political or social point in people mouthing off. It is only their actions and how they do it that really counts.

It is the type of crap that the same dickheads complaining about it would almost certainly say in private about some groups, and many say here in public. I just deal with it here in the same way that I’d deal with it everywhere – by calling the perpetrators fuckwits in varying degrees of politeness depending on my mood.

But a recent phenomenon to me has been the use of the net to form virtual braying lynch mobs. That is more far interesting and now seems like a good time to reflect on it.. A good example is the disgusting virtual lynch mob that attacked  Winston Peters last year in both the media and the internet. And to read my caustic opinions about that you are gong to have to turn the page.

Now I dislike the opinions, politics, and generally the overall political demeanor of both Winston Peters and NZ First probably as much as anyone can. My opinions on them have been caustic ever since it formed as a party. NZ First  are populist panders to the lowest common denominators of our society. But I also have virtually the same opinion about most talkback hosts, most TV, No Minister, David Farrar when he enters dog-whistle mode, and sometimes even some of our own authors posts. It is the orchestrated publishing of flawed opinions without looking at the evidence for the sole purpose of increasing heat, votes (and ratings) that really gets up my nose and stinks to high heaven.

It was pretty clear very early on that there was nothing actionable in the allegations about Winston and NZ First. For all of the heat of the lynch mob and the media beatup, almost all of the allegations and insinuations on the net and media turned out to be pure utter crap – as I’d anticipated. The only thing that happened was Peters got censured by a show-trial in the privileges committee. That merely diminished its authority in my eyes and many others. Quite simply nothing was proved, probably because there was literally nothing happening apart from sloppy book-keeping.

Initially most of it was simple inflammatory articles in the media and blogs. That probably wasn’t helped by how many journo’s that Winston had managed to offend over the years. They formed a quite distinctive mini-dog-whistle community in their own right during this sorry saga.

However what has been really funny in a black comedy manner has been watching the members of that lynch mob attempting to justify their actions and words in support of ‘justice’. Quite simply they are clearly hypocrites, from the comments here, to the supercilious media commentators, and to the ravings of David Farrar and other bloggers.

It looks to me as if the same thing is happening to Hone. He has simply done what Hone does – been a bit of a big-mouth. It is no different to almost every person I know in the right circumstances. In this case he is probably representing his voters quite well, he sounds like some youngish Maori males of my acquaintance. 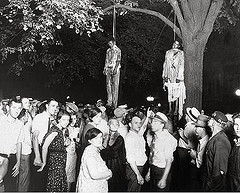 Meanwhile, the dog-whistling for the mob diverts attention away from more serious political issues. The material forming the crux is edited down to a few phrases taken out of context by the media and dog whistlers. If you read the whole e-mail trail a different picture emerges. But it is something that Hone would have said to your face with no hypocrisy.

The faux outrage of the bigots who say exactly the same things about everyone else forms a lynch-mob. It is a disgusting use of the net. We will have to face more of these virtual lynch mobs in the future on our local net and media.

My advice: don’t let the fuckwits from the lynch mob win. Keep asking them the questions that they don’t like to answer. When they start braying, remind them of their words in previous periods of group insanity. Republish their comments with notes about the end-results. Make it clear exactly how big a pack of fools a lynch mob is.

74 comments on “I don’t give a shit about Hone. But the lynch mob is interesting. ”