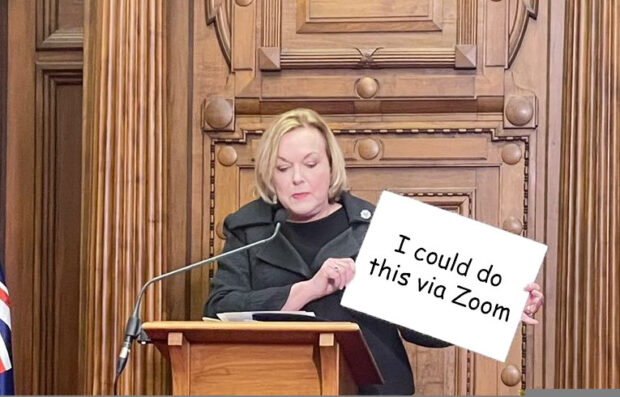 Parliament, or at least limited members of Labour, National, Green and Act MPs is now meeting.  And the experience has been totally underwhelming.  A well run Zoom meeting would have achieved more.

On Tuesday National’s problem was that they went for the knock out blow in Parliament.  Each attack was easily parried away.  Chris Hipkins and Jacinda Ardern chose to try and talk National through the intracices of mass distribution of a highly unstable vaccine that needs refrigeration at very low temperatures and where the supply has to be managed.

It was a waste of time but it provided a couple of brutal slap downs.  For Collins:

Hon Judith Collins: Did the Government ask Pfizer to slow down delivery of vaccine so, as her COVID response Minister told Newstalk ZB in June, “We don’t end up with a whole lot sitting in the freezer.”, and is her Government now asking them to speed it up again, as her associate health Minister told media yesterday?

Rt Hon JACINDA ARDERN: The member is sharing factually and misleading information. We have over 10 million doses of Pfizer for our country’s roll-out. That is more than the number of people who are even eligible for a vaccine. What the Minister for the COVID-19 Response was referring to was, as we reach the point where all of those vaccines are delivered, how can we ensure that we see no wastage for the fact that we have more doses than we have people who are eligible to receive them, and we have expiries for vaccines for the RNA vaccine that are, at best, four months. I wish that the member would pay more attention to the detail of the Minister’s statements, rather than misleading people.

And for David Seymour there was this zinger from Chris Hipkins:

David Seymour: How can he be satisfied that the current alert level 4 orders are working if he doesn’t know how many inter-bubble transmission cases there have been, and the whole point of a level 4 is for people to remain within their bubbles to the extent possible?

Hon CHRIS HIPKINS: Perhaps if we were doing this via Zoom, rather than with all the distractions of the parliamentary debating chamber, the member might have listened to my previous answer where I addressed that.

Then yesterday things did not start off well for Judith.  She went full blast on Breakfast’s Indira Stewart who asked her some pretty tough questions which is strange because Judith just wanted to get Parliament sitting so that she could do the same.

This is without doubt the most damaging interview of a senior politician that I have ever seen and I have seen a few.  Well done Indira Stewart who did something really important, she kept her cool and she asked short but precise questions.

The questions were perfectly reasonable ones to ask, why did Collins insist Parliament meet in person, did she get tested before travelling to Wellington from a Covid hot spot and which parts of the Pacific community had she met.  The response from Collins, coincidentally appearing by zoom, was incredible.  She did her usual version of giving back double.  Her problem is that it did not make her look strong, just weird and out of control and certainly not the sort of leader you would want to look after the country in the middle of a global pandemic.

What did Judith do after this?  She then accused Stewart of having a political agenda, thereby drawing further attention to her train wreck of an interview and ensuring that even more of New Zealand would have seen it.

Then onto Parliament where Collins’s questions were again battered away by Jacinda Ardern.  Like this one:

Hon Judith Collins: Can she rule out having to delay vaccine appointments that have already been booked due to an anticipated shortage of vaccines?

Rt Hon JACINDA ARDERN: Actually, that is incorrect. It is not that we have had a shortage of vaccines; it’s that we’ve put in additional surge capacity to allow a considerable increase in vaccinations. Through this period that we’re in now and leading into over September, we’d always planned around the supply that we had, which would have enabled us to, on average, deliver about 50,000 doses a day or 350,000 across the course of the week. When the outbreak started, we saw, of course, as you may expect, some demand lift, and we decided to then increase the capacity to provide surge vaccinations. That has led to over 500,000 doses being delivered a week. What we’re now seeking to do is meet that additional demand by seeking additional supply. Our goal, if we are unable to do that is, as much as possible, maintain the bookings that we have, but also, in those areas where there is big surges in demand and it is particularly high needs for us to vaccinate, keeping that additional surge capacity in Auckland and the upper North Island.

Ardern has the perfect way of handling Collins.  She keeps her cool, yet chides Collins for any spin and at the same time shows she, Ardern, is on top of the details.  Collins was left floundering.

Then on to the general debate where Robertson absolutely monstered Collins:

My major concern is that the last couple of days may be for Collins what this facebook post was for Bridges.

The difference is that back in April National’s large caucus really thought that it was born to rule and that the Government benches were just around the corner.  Nowadays you can tell that their morale is shot.  I have never seen such a bad day in the House for National.  All of their questions were brushed away and their speeches were appalling.

Chris Bishop was the only one who showed any spine and any sense of what opposition means and I sense a run for the leadership by him is building.  Interesting times …