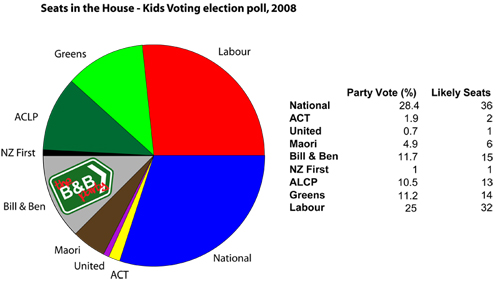 The results are in from the NZ Post-sponsored Kids Voting project, and while it’s a worthy project it nonetheless shows why we don’t allow children the franchise.

More than 13,000 school students nationwide took part in the project aimed at encouraging kids to take an interest in our democracy. The resulting Parliament had Labour and National hold their places as the major parties, but the stand-out winners were the Aotearoa Legalise Cannabis Party with 10.5% and 13 seats, and the joke Bill & Ben Party with 11.7% and 15 seats.

However, due to Bill & Ben only having two candidates on their party list they would lose 13 seats, giving Parliament an ‘underhang’ of only 107 seats. On these numbers Labour, the Greens and the Aotearoa Legalise Cannabis Party could easily form a government.

Hmm… come to think of it, why don’t we give kids the franchise?