Kiwis are voting with their feet, or rather their arses. Patronage of public transport is skyrocketing to the point of overcrowding while state highway use is falling among except for freight. You have to wonder why the government keeps building expensive highways that will be underused when public transport is full to the brim. 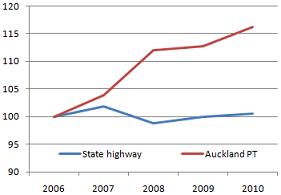 In fact, state highway use has been nearly flat since 2003 (rising from 1.63 on the index to 1.69 over that time) with most of that down to heavy traffic.

Yet the government is pouring a billion dollars per year this decade into new state highways, some of which are already expected to have costs exceeding the benefits – and that’s based on NZTA’s conservative measures that don’t account for oil price shocks like the one we’re experiencing.

Meanwhile, public transport gets a fraction of that amount.

This is madness in a time when petrol prices are at near record levels and rising.

I know I’ve been saying this a lot lately but it’s important: the government has choices. It could choose a low-cost, low-carbon, low-oil transport model that is fit for the future and will enhance our economy by lessening our oil imports or it can lock us into a 1960s transport model that will waste billions of dollars invested on white elephant motorways.