A goal is not a strategy

Last year, the New Zealand Institute lambasted the Nats’ ‘aspiration’ to catch Australia by 2025 with a report entitled ‘A goal is not a strategy‘. Did the Nats change? Of course not. Yesterday, their energy strategy was released. It offers some goals but is mute on how to get there. It’s not really a strategy at all.

In the middle of another oil shock, with more on the way, and with the effects of climate change becoming ever more undeniable, we need an energy strategy. It should be a visionary document outlining how we will reduce our dependency on fossil fuels through efficiencies and utilising energy from other sources, while achieving our social and economic goals.

So, what is in this Energy Strategy if not a strategy?

The thing is only 40 pages long with 20% being blank pages and more filled up with whole-page graphics. Its content reminds me of nothing so much as Don Brash’s wafflely 2025 Taskforce reports (although not as long, thank goodness) or those insultingly vague Whanau Ora documents.

Like Whanau Ora, there’s even a stupid circle graphic that sums up the ‘strategy’: 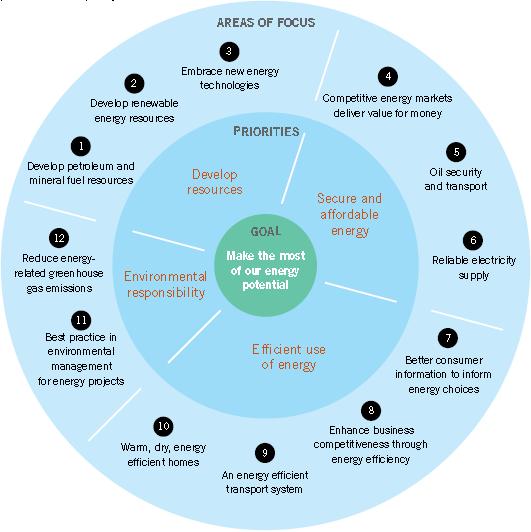 Notice there’s no ‘how’ in there. Each circle going outwards is just a more detailed way of saying the next layer inward. Then, there’s the timeline of energy intensity: 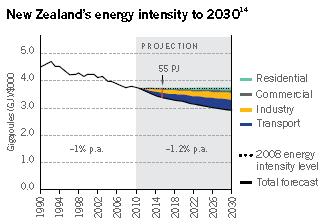 Note that, again, there’s nothing to say how these energy intensity improvements will be achieved. And, moreover, nowhere in the document does it admit that if they do improve energy intensity at the goal rate (1.2% per year) that will be less than the rate of economic growth the government projects for the same period. That means total energy use and greenhouse emissions rise under this strategy.

Remember, the government just recommitted to its goal of reducing our greenhouse emissions by 50% by 2050. Yet here is its energy strategy with a goal of more emissions.

I/S at No Right Turn puts it well:

So, what’s changed [from last year’s draft strategy]? Apart from the photo of the Minister on page 1, virtually nothing. The plan still puts finding oil first and the environment last. It still proposes no concrete actions to achieve its goals. It even claims that this is appropriate:

The decision to not list specific programmes will ensure that the strategies remain relevant over the next five years. The 2011 NZEECS sets clear targets, objectives, policy directions, acceptable means, and names the government agencies responsible for facilitating delivery. Details of government energy programmes are available elsewhere. This approach is also more honest. Goals will be achieved not due to lists in the NZEECS, but due to ongoing Cabinet commitment to prioritise energy efficiency across its overall work programme to meet its obligations and targets set out in the NZEECS.

Which is bullshit. Lets be clear: the absence of specific actions in both the NZES and NZEECS is for one reason and one reason only: so the government can’t be held to account for not doing anything.

It would be a mistake, however, to think the government has no plans for energy , just because its energy strategy isn’t worth the paper its printed on. Behind the waffle, the government’s intentions can be found:

– drill, baby, drill: the Nats plan to push ahead with offshore oil drilling, and lower the royalties we get from foreigners taking our oil if that is what is necessary to get them to drill in, so far, disappointing areas like the Great South Basin.

– power your car on coal. Well, not quite but the Nats are keen for Solid Energy to dig up huge swathes of Southland and turn the watery, energy-poor lignite beneath into briquettes for industrial heating and diesel. The only problem is that making lignite into something useable requires huge amounts of energy and emits heaps of greenhouse gases (not to mention other pollutants). Fortunately, the government has arranged it so that you and I pick up most of the bill for Solid Energy through the Emissions Trading Scheme subsidies.

The government ought to be ashamed for producing such a vague, useless document and trying to pass it off as a strategy to guide or energy sector for the next two decades. They’re not, of course, because it’s waffle skillfully misdirects us from what’s really going on – the rejection of the energy sources of the future and the commitment of New Zealand to dependence on fossil fuels.