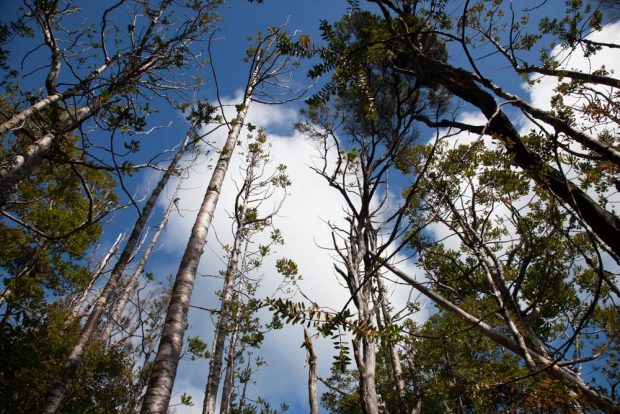 In an announcement that will probably gain them few extra votes but still warms the cockles of my heart, Labour have promised to put Kauri Dieback on the same scale of national disease response as Bovine Tuberculosis and Kiwifruit PSA.

They have also proposed an extra $32 million over five year to combat this disease.

For my home patch in the Waitakere Ranges, the Kauris in my property are beautifully healthy, and need four people to get their hands around. And there’s one in a secret place about 400 metres from our house which is at least as wide as Tane Mahuta itself. No other city in the world intersects as Auckland does with a subtropical rainforest.

But just over the ridge in what used to be Colin McCahon’s stomping ground, most of them have died off, and they have to stand there and rot until they fall because it’s too hard to take them down without spreading it further.

As Labour Leader Jacinda Ardern noted today: “Our Kauri forests are among the most ancient in the world, are a taonga for Maori, protect local ecosystems and they’re under threat from Kauri dieback.”

Three years ago it was already recognised that the Kauri forest within the Waitakere Ranges were the fastest-infected and essentially it was out of control and on the way to wiping them all out.

The scale of threat to the whole of the Waitakere Ranges from weeds, pests, bird kill, and most other measures, is set out here in 2018.

This is despite most of the land being in Watercare management, or Auckland Council management, and despite massive and intensive efforts to push the damage back at a really large scale as in Ark in the Park.

or on a house-by-house intensive eradication and control programme like the award-winning South Titirangi Neighbourhood Network.

The heroes who have dedicated decades of their lives to this are local legends. The Waitakeres are awash with dozens of activist grouper trying to reverse the damage and restore the mauri of Tane O Tiriwa. It’s still not enough against this disease.

Many of the tracks into the forest are simply locked away, and others are highly managed with movement-activated turnstiles and disinfectant footwear baths. It’s almost like COVID19 access for trampers now. If the Waitakere ones are in trouble, the remaining Northland forests are also a mess.

A National Pest Management Plan is the strongest tool available under the Biosecurity Act, so this raise in threat response makes it one of only four similar-scaled national responses.

Hopefully we see Auckland Council match this funding and this effort. We are now a country in which defending against foreign disease is the overriding and restoring its damage to ourselves and our country is our strongest overriding security risk.

Great to see Labour turning again to the practicalities of conservation.