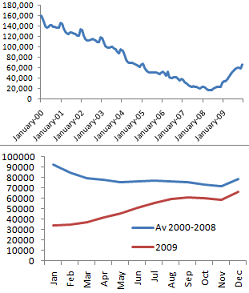 You may remember that late last year John Key, Bill English and Paula Bennett could hardly find the words to praise themselves for the falling numbers on the dole. That was until I pointed out that it was a seasonal dip that always occurs between September and November, and, actually, the seasonally dip over the previous nine years average 5.2%, not the merger 2.6% Key and co were skiting over.

Now, predictably, the seasonal dip has ended and dole numbers have spiked up. The suprise, though, is by how much. The usual Nov-Dec increase is 9.2%, this time it was 13.3%

The number on the dole increased by 7,787 – from 58,541 to 66,328. Of course, Bennett tries to dismiss this enourmous increase as the seasonal variation but just take a look at the trend over the last year and see if you believe her.

And how’s this for genius calls from the minister:

Yeah, that’s because twice as many people are on the benefit, Paula. Same churn rate, double the population. And if you think about it, if 3,810 people went off the dole, and the net increase was 7,787, then 11,597 new people went on the dole in December – 600 per work day.