Already embroiled in a fraught Treaty settlement with the Crown, Tamati Kruger seems to have made things worse with an inopportune joke. 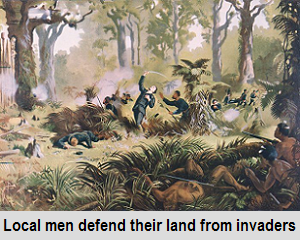 “The good news tonight is that I was having dinner with my whanau as opposed to with the representatives of the Crown in which case I would be lucky to get away without having my land stolen and my family murdered” said the lead Tuhoe negotiator.

Asked about the comment after his speech, Mr Kruger said he was sure the Prime Minister would get the joke.

Said one prominent Right wing commentator: “Imagine if John Key ‘joked’ that Tuhoe are a bunch of cannibals, there would be universal outrage and rightly so”.

But come on. It was just a joke!

As Kruger later explained, he was clearly taking the piss out of himself, not the people he was alluding to being murdering thieves.

Besides, we all know it’s true that the Crown are a bunch of thieving killers.