National and its no tax promises 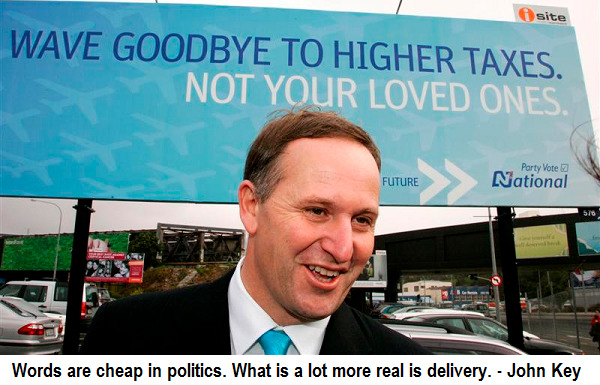 BLiP used to have this very popular regular post where he listed porkies that John Key had said over the years.  A few of them involved tax.

National promised that New Zealanders could wave goodbye to higher taxes before the 2008 election and then imposed a myriad of them including the infamous increase in GST which John Key confidently said they would not do.

The promise received this comical relief in Parliament in 2015.

And it deserved this cynicism.  After all there were 18 new taxes the last Government imposed.  And this included five increases to the Fuel Excise Duty and Road User charges.

Perhaps the most startling new tax was the introduction of a two year bright line capital gains tax for real estate.  It was necessary.  The country’s real estate market was getting out of control.

And since then, thanks to the tax, Labour’s strengthening of it, tighter lending rules and reduced immigration the market has started to stabilise.

Yesterday Simon Bridges gave a speech which again had the tried and trusted theme of no new taxes.  According to him National is National is ambitious for us and our families, and will develop policies that help us get ahead and fight against needless costs being imposed on us.  Such strong rhetoric …

And he promised to repeal any capital gains tax that Labour imposes.

Although the terms of the actual commitment are fairly rubbery.

So today, I am making a commitment to you – if the Government legislates a Capital Gains Tax, like the Tax Working Group has signalled it will recommend, before the next election, then we will get rid of it.

Given that Labour promised not to introduce a CGT before the next election the commitment seems somewhat hollow.

There were other somewhat incredible claims.

The typical car now costs $15 more to fill up than this time last year thanks to new taxes, a slumping dollar and higher oil prices.

The impact is real. We hear it every day.

We’ve heard from a mother in Canterbury who can no longer afford to take her Down Syndrome son to a special school in the next town over because she can’t afford the petrol.

Another person has told us how they are buying their parents petrol vouchers for Christmas so they can afford to go to their regular hospital visits a 45 minute drive away.

And a hearing clinic in Auckland says people are not turning up for appointments because they can’t afford the visits, or the petrol to get there.

As mentioned by Selwyn Pellett the claim is difficult to substantiate.

Let me call that as rubbish @SimonBridgesNZ . The average NZ car is probably around 60 litres. So if it’s increased by 25 cents a litre it’s possible. Has it? https://t.co/CMSTubENDd

To put this into perspective the Auckland Regional Fuel Tax is 10c a litre and applies to Auckland only and for the rest of us the Government has increased the existing RUC by 3.5c a litre.

There were other passages from Bridges’ speech that were jaw dropping.  Like this one:

If this Government reined in its wasteful spending it would be able to continue increasing funding for core public services without more taxes.

Looks like giving nurses and teachers overdue wage increases and fixing our hospitals so that sewerage does not leak out of the walls are not considered to be to be core public services.

It is the same old song book the right use again and again.  No new taxes.  Then they get into power and forget quickly what they promised.

Hopefully this will not happen in the foreseeable future.  Simon Lusk is reporting National’s polling has it in the mid 30s and it has taken a 10 point hit since the election.

So the chances of National being in a position where it can break its tax promises are not good.  At least in the foreseeable future.

38 comments on “National and its no tax promises ”