Like the Key government, today’s anonymous Herald editorialist refuses to acknowledge the implications of the OECD report on inequality. The title is a bit of a giveaway:

The OECD, often described as a club of rich countries, has produced a report supporting a view that a widening gap between rich and poor within its member states is not only bad for their society but also harms their economic growth. The report is of particular note to New Zealand because it names this country as one of those in which income inequality has widened most since the mid-1980s. It estimates that rising inequality has cost New Zealand more than 10 percentage points of possible economic growth since 1990, which appears to be more than any other member of the club.

In one sense this is not a surprise. New Zealand was a highly protected economy until the mid-1980s with a strongly unionised labour force, high taxation and universal benefits. It had removed these arrangements rapidly by the mid-1990s, conscious that it was opening itself to world markets later than most and with trade disadvantages of distance and scale. Even now, with its income gap having grown more than most, inequality in New Zealand is no worse than the OECD average.

So we removed “a strongly unionised labour force, high taxation and universal benefits”. We opened everything up to competition. And inequality in NZ got much much worse as a result (quicker than anywhere else in the world). For example: 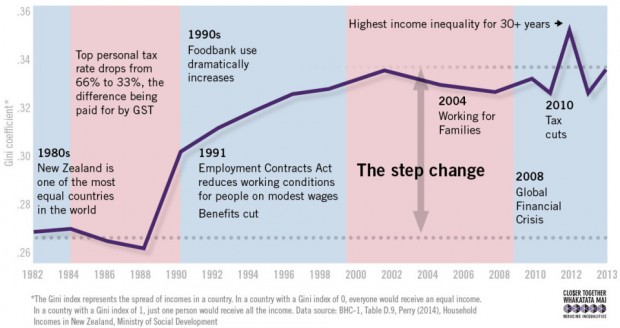 After various paragraphs of waffle, our anonymous editorialist concludes:

Competition has a way of closing the gap.

Hello what? We introduced competition and the gap widened. Competition doesn’t close the gap, it widens it! In other news, black is black not white, and water is wet. How can you write such drivel?

The answer, dear anonymous, was right there in your article after all. What were the tools that made the New Zealand of old one of the most equal countries in the world? “A strongly unionised labour force, high taxation and universal benefits”…