One citizen. One dollar. One vote.

The Occupation movement in most locations seems to be staying true to its ideals. Decision making is a participatory (not a representative) democratic process. That has advantages, it’s inclusive and egalitarian. It also has disadvantages, there’s no strong leadership. The movement is often accused of having no clear goals or purpose.

Out of the confusion, however, some powerful messages emerge. The first and strongest was “We are the 99%”, stressing the obscene concentration of power and wealth in the hands of the richest 1%.  Now a second message is gaining strength: “One citizen. One dollar. One vote.” Here’s a popular summary: 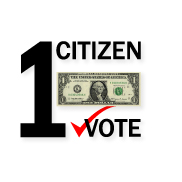 This became a slogan for the “Day of Rage”, and has been covered in various places (Google search).  Tracing it back to its source, the meme was forged by writer Dustin Slaughter:

To Liberty Plaza’s Patriots: “Change The Hearts Of The Oppressed”

Something important is happening at Liberty Plaza in Lower Manhattan. The encampment that began there on Saturday, September 17th, is a vocal and stark reminder of growing American youth discontent. Banks and other corporations are sitting on record profits and CEO salaries continue to climb at an unprecedented rate, while students and the average American worker face an anemic job market and growing economicdisparity. The occupation in Lower Manhattan may be the start of a sea-change in so-called American democracy. But if it is a true change (and other organizing efforts in cities like Chicago and Atlanta, including an ongoing one in San Francisco suggest that it may be), certain things must change in order for this nonviolent revolution. …

Growing a movement means bringing others from different segments of society together. It quite often starts with the radical left (intellectuals and the youth), as the Egyptian revolution this year and the student-started revolution in Poland that eventually brought down the Soviet Union show us. But in order to sustain these movements, one demand or even a short list of demands must be crafted to appeal to larger segments of society. …

So, permit me to make a suggestion: “One citizen. One dollar. One vote.” Getting special interest money out of politics changes the whole game, and addresses a myriad of concerns expressed by not just the Liberty Plaza occupiers, but an overwhelming majority of Americans.

It’s a plea to reclaim democracy from corporate entities, vested interests and shadowy money.  It’s simple and powerful idea – though the actual dollar amount would need to be adjusted for population size.  In effect it would mean, in small countries like New Zealand, the state funding of political parties, which I believe would go a long way to cleaning up politics.  So yes, bring it on.  One citizen.  One dollar.  One vote.

36 comments on “One citizen. One dollar. One vote.”