An open letter has accused Paula Bennett of serious historical crimes. Bennett has denied the allegations and threatened legal action. Facebook has removed the source documents.

Those compassionate conservatives of the National Party have a message for the increasing number of homeless who occupy our Brighter Future.

Stay on the treadmill suckers!

That is the Nats’ advice to aspiring Auckland house buyers.

Key vs science on water quality 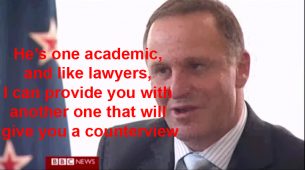 The Nats are in a difficult spot here, no doubt about it. The weak steel is a serious issue and it should be investigated. But their usual tactics of deny and lie have been caught out yet again.

After a strong reaction, TVNZ has taken down video and an article featuring a climate change denialist crank.

Nats in the bunker of stupid

The bunker of stupid is where you go to hide from facts you don’t like. John Key is there, hiding from the latest record unemployment figures. Joining him today is Women’s Affairs Minister Jo Goodhew, reportedly denying the rapidly increasing gender pay gap in NZ.

Nats in denial about education and poverty

Shearer’s speech on Sunday has sparked the discussions that this country needed to have about education, about poverty, and about the sad link between them. With every statement the Nats show how deeply in denial they are about these issues.

Righties cutting themselves on Occam’s razor

The Left has its fair share of conspiracy theorists – who think that, for reasons tenuously explained at best, various, often opposing, organisations are secretly carrying out massive cons and not being discovered. But we’ve got nothing on the Right. Belief that climate change is world’s most enormous conspiracy, engineered for no good reason, is an article of faith for these guys. If it weren’t so serious, it would be hilarious.

Bennett and Key at odds?

Bennett and Key are divided in their opinions and their stats, but at least they’re united in their state of denial.