Some interesting figures have come out of the Reid Research poll of Auckland Central voters. The candidate vote is not something that Chloe Swarbrick would have wanted.  Helen White is well ahead on 42.3%, National’s Emma Mellow is well back, 15.7 percentage points back on 26.6% and Chloe is slightly further back on 24.2%.  One should never say never in politics but the dynamics are all wrong.  If Chloe was closer then there would be a temptation for some progressives to support her.  But right now that dynamic is not there.

What is especially interesting is the party vote. 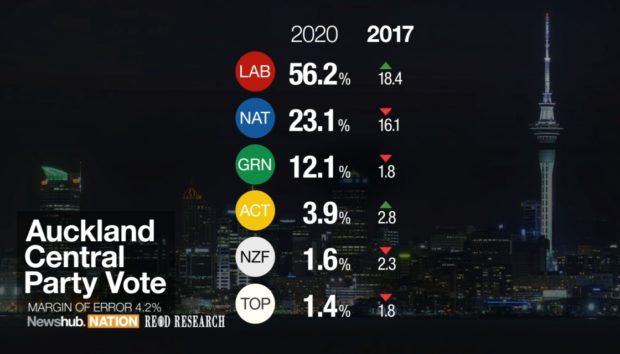 This is a rough and ready analysis and something that statisticians would not approve of but if you extrapolated these results then it appears that Labour is on about 55%, National 28.3% and disturbingly the Greens are below the threshold and more disturbingly NZ First is almost over the threshold.

I believe that kiwis will do the good old kiwi thing and start sharing the love and support around.  It would be unprecedented for Labour to poll over 50% and Green’s presence in the next Parliament could be vital for the confirmation of a progressive Government.

33 comments on “The Auckland Central Poll ”