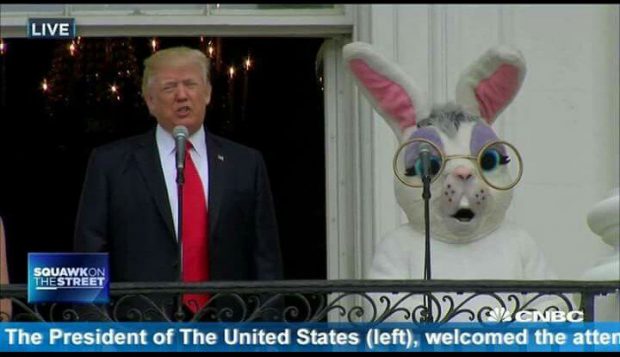 Donald Trump’s had his first 100 days ruling his big chunk of the world.

Back in the dim ages of Obama’s second term – remember them – we could make out his mistakes across the world. Anything to do with Syria, or containing ISIS, anything with “Arab Spring” in it, all of that.

But at base he was withdrawing the U.S. from military invasions, sustaining internationalist platforms like the U.N., and addressing the big global risks like climate change.

What a difference a mere 100 days makes.

Assumptions that had sustained all prior U.S. presidents look ready to collapse:

1. The United States enjoys and will continue to enjoy uncontested military primacy, both globally, and in all strategic theaters.

– It only took some proper saber rattling for military historians to recall the last time the US and allies got its pants kicked all the way down the peninsula in Korea.

2. U.S. allies are the richest, most capable countries in the world.

– The E.U. and Japanese economies sputter, and the Australian one, like ours, is a property bubble stretched over fickle commodity cycles.

3. A richer and more globally integrated China will also be a freer and more peaceful China.

China remains the best denial of any relationship between growing wealth and growing political freedom.

And then Russia figured out how to screw the U.S. election in favour of Trump, got its moles into the whole administration, and really flexed into the Middle East.

5. The advance of democracy is unstoppable and irreversible.

But strangely too much democracy, applied too often, simply accelerates the media cycle into a bad binary star at base of which is a black hole of populism.

… until super-nationalism revives as it has.

7. Technological innovation will lead to greater human flourishing and freedom, and will disproportionately favour the United States.

We’re still a way from getting a clear answer on that.

When you’ve all finished rolling on the floor laughing with the assumptions, you’ll realize your incredulity is the distance between President Obama’s idealism and his grasp of global issues, and the efforts of the Donald Trump administration.