The right is splintering on climate change 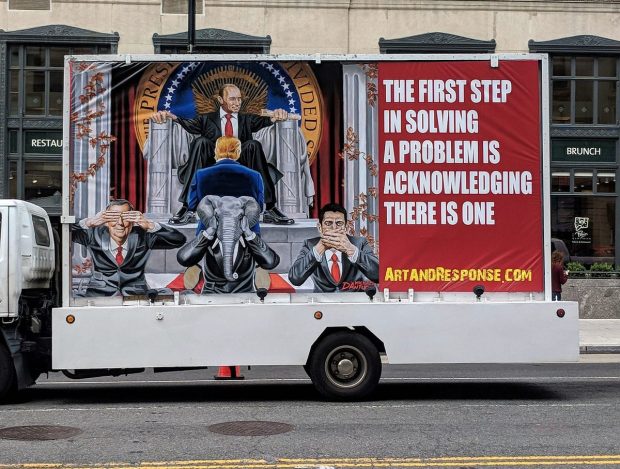 Earlier on Trump had been reported as saying at Davos the usual right wing attack lines on climate change.

From Jeremy Diamond at CNN:

President Donald Trump attacked climate activists as “perennial prophets of doom” on Tuesday while addressing the World Economic Forum, in Davos, Switzerland, where the agenda is focused on tackling the climate crisis.

Trump’s remarks underscored the chasm between his denialist view of climate change and the overwhelming scientific consensus driving the rest of the developed world to action. Speaking shortly after the teenage climate activist Greta Thunberg accused world leaders of not taking action, Trump rejected calls for urgent action and encouraged the world to instead embrace “optimism.”

“To embrace the possibilities of tomorrow, we must reject the perennial prophets of doom and their predictions of the apocalypse,” Trump said.
“They are the errors of yesterday’s fortune tellers and we have them and I have them and they want to see us do badly, but we don’t let that happen,” he added.

Trump has promised to plant a trillion new trees.  Which is a good thing.  But much more is required.  As noted by Greta Thunberg:

Our house is still on fire. Your inaction is fuelling the flames by the hour. And we’re asking you to act as if you love your children more than anything else.”

Turnbull’s comments appear to be a thinly veiled attack on Scomo and the current Australian government.

From Paul Kemp at the Guardian:

Turnbull, who lost the prime ministership in August 2018 in part because of his own party’s opposition to his plans to do more to reduce greenhouse gas emissions, made the comments to BBC Newsnight on Tuesday (Wednesday morning, Australian time).

The US president told the world’s business leaders to stop listening to “prophets of doom” as he used a keynote speech at the World Economic Forum to attack the teenage activist Greta Thunberg over her climate crisis warnings.

Asked about the comments, Turnbull replied that Trump had been “quite a prophet of doom himself”, citing his acceptance speech to the 2016 Republic convention in which Trump painted the picture “of America threatened by crime and gangs [and] invasion from asylum seekers”, which Turnbull labelled “quite apocalyptic”.

“He uses the politics of fear when it suits him,” Turnbull said. “Trump is the leading climate denier in the world. He’s leading the most influential nation in the world and he’s actively working against global action to reduce emissions.”

The incident highlights an interesting phenomenon.  The right are splitting on climate change.  The overall effect is that right wing governments are still not able to take the urgent action required to address the problem but at least some of them are acknowledging a problem.

Locally National Hunua MP Andrew Bayley recently had an opinion piece (in Premium) published in the Herald where he warns of the danger posed by climate change.

The piece is on the need to safeguard the Antarctic and a recent International Assembly that he helped organise.  And in discussing this he puts climate change at the front and centre risk that the South Pole is facing.

Eight scientists from around the world were invited to address the assembly, including Victoria University’s Professor Tim Naish. He talked about Antarctica’s ice sheets and how they will contribute to future sea level rises. He explained that 70 per cent of the world’s fresh water is locked up in Antarctic ice, and that sea levels have already risen by 20cm s in response to 1C of global warming.

His message was sobering: If we continue the way we’re going, he believes sea levels could rise by 1.5m by the end of the 21st century. If that happens, 800 million people around the world will have their toes in the water.

The assembly concluded with a unanimous message:

A consensus statement signed by all 19 noted with concern “the recent Intergovernmental Panel on Climate Change’s Special Report on the Ocean and Cryosphere in a Changing Climate, which highlights the profound effects of climate change on Antarctica’s ecosystems and the potentially catastrophic effects of Antarctic ice loss on global sea level”.

Contrast Bayley’s somber rational analysis with that of Paula Bennett from earlier this week.  Rather than teach our children of the risks posed she misrepresents what the new teaching resource says and engages in rhetorical flourishes about balance to attack something that is actually well balanced.  Note to all righties out there, the teaching resource does not advocate that all children should become hippie vegans, rather it notes correctly that lowering the amount of meat that we eat can have beneficial environmental effects.

“This is voluntary … Climate change being taught in our schools is not necessarily a bad thing – it is about our future and young people need to understand it better. We don’t like elements of what’s being suggested should be taught, and there does need to be a way for the young people to have a discourse that can create that debate of what the future looks like for them.

Jarrod Gilbert in the Herald sums the situation up in these terms:

Based on all of the information available to us, there is no sound argument against the existence of anthropogenic climate change, only ignorance of the scientific consensus and an arrogance to argue against it – often by people armed only with an elementary education and an internet connection.

When you have highly educated scientists amassed on one side, it’s prudent to stick with their assessment of matters relating to science. If you want to understand how to be a complete twonk, seek notes from those peddling the other side. But for science, definitely stick with the scientists.

And he has the perfect retort to National’s attack on the climate change educational material:

The problem with information uploaded to the internet is not just that it bypasses these hurdles and can therefore be utter rubbish, it can be utterly convincing. Being fooled by charlatans is nothing to be ashamed of, in an age awash with information, it’s sometimes difficult to tell the credible from the credible-sounding.

For this reason, having the facts of climate change taught in schools is important. Radio shock jocks who are concerned that children are only being told one side ought also ask why the other side of round earth theory is not taught, or that the moon landings were filmed in a desert in Utah.

Trump and Scomo notwithstanding it appears that even the right is coming to the view that climate change poses a major problem.  How far they are prepared to go could determine how big a hole the world finds itself in the next few decades.

70 comments on “The right is splintering on climate change ”