The TPPA day of shame 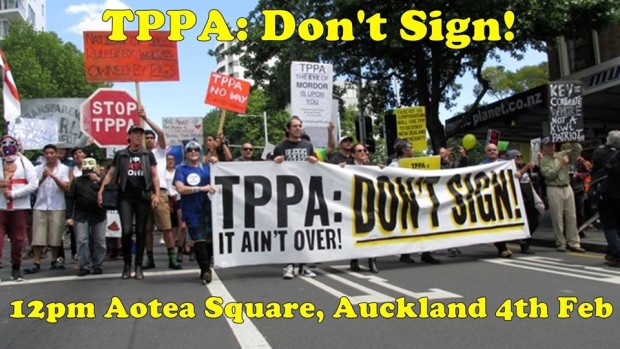 Today the Government will sign the Trans Pacific Partnership Agreement at Sky City in Auckland. They know the agreement is very unpopular. They could have signed it overseas or down in Queenstown or next week but instead they chose to sign it at Sky City two days before Waitangi day.

The host they chose has received a law change worth $527 million for which it has to build a convention centre. The legislative concessions will increase human misery.

There is a big march planned today in Auckland at 12:00 pm. The Government probably brought forward the signing to 11:30 am so they could put their thumbs in their ears and say “nananana” to the many kiwis who will again express their displeasure.

The Government will reuse its spin lines and say that it is all about opening up trade with 40% of the world’s GDP.  Shame that we already trade with these nations and the extra trade that will result is marginal.

This statement by Alfred de Mayas, the UN Independent Expert on the promotion of a democratic and equitable international order provides some real insight into what is wrong here. He said:

Trade is not an end in itself, but must be seen in the context of the international human rights regime, which imposes binding legal obligations on States. Trade agreements are not ‘stand-alone’ legal regimes, but must conform with fundamental principles of international law, including transparency and accountability. They must not delay, circumvent, undermine or make impossible the fulfilment of human rights treaty obligations.

I am concerned that notwithstanding enormous opposition by civil society worldwide, twelve countries are about to sign an agreement, which is the product of secret negotiations without multi-stakeholder democratic consultation. The Trans-Pacific Partnership (TPP) is fundamentally flawed and should not be signed or ratified unless provision is made to guarantee the regulatory space of States.

If you want proof of how flawed the process is it took all mention of “climate change” out of the treaty.

The treaty is a farce. The Government is ramming it through even though it knows this. Time for everyone to make their voices heard.