The Two Nations: or, Why Won’t They Bail Me Out?

Of all the mysteries of the present financial crisis, the most baffling is why government agencies have gone to such lengths to protect the value of bad investments made by large institutions and multi-millionaires.

After all, under the rules of the capitalist game, owners of shares and bonds are supposed take a “haircut” if the investment goes bad. And it’s also an Economics 101 principle that if you give relief to the little people, that will have a more stimulating effect on the economy than if you bail out the wealthiest interests in society.

For instance, in the Scandinavian financial crisis of the early 1990s the Swedes made the shareholders take a haircut; and something similar has just happened in Iceland. The result is a short sharp shock and then everything gets back to normal.

But nearly everywhere else we’ve seen governments throwing money at the banks so as to preserve the value of their shares and bonds regardless of who they are owed to, while slashing social spending and, in America, forcing those who owe the mortgages into a new kind of slavery, even as the country slides into gloom and depression. And the politicians are doing so even when they were elected on the opposite platform, like the UK Liberal Democrats.
Perhaps the answer lies in an interview recorded nearly two years ago with US Representative Paul Kanjorski, in which Kanjorski explains that of course it would make more sense to bail out the little people and force the investors to face up to their bad investments and shoky pyramids; but the problem is that any attempt to do so would lead to a total run on the banks by investors.

One can think of all kinds of possibilities for a sensible, Swedish-style solution, such as a government-backed write-down in the value of both real estate and mortgages. Nearly everyone agrees that real estates and mortgages have been inflated by a financial bubble to levels far above their ‘real’ value, and are acting as a drag on the rest of the economy as a result. That is the most serious aspect of the present financial crisis. Nonetheless, it seems impossible get Humpty Dumpty off the wall.

Why is such a solution impossible? Perhaps, at the root of the political impasse, is the simple fact that the top 1% in the still-very-influential USA owns more than the bottom 90% . Much of the wealth of the top 1% is currently in inflated real estate values. And these are also the people who fund the political parties. Lastly, the anonymity of the modern market system means that the owners have no social ties with those who owe; it is a generalised condition of absentee landlordism.

And so America now resembles 1840s Europe, Britain or Ireland, in the sense of being:-

Two nations between whom there is no intercourse and no sympathy; who are as ignorant of each other’s habits, thoughts, and feelings, as if they were dwellers in different zones, or inhabitants of different planets. THE RICH AND THE POOR. 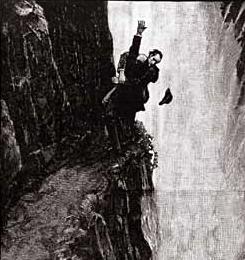 Of course America herself has been two nations before [a conflict itself arising from the plantation owners, the capitalist elite of the day, trying to maintain the source of their privilege – Marty]. And so, under conditions that resemble the explosive, yet paralysing, economic tensions of the mid-nineteenth century, over absentee landlordism, capitalists and workers, and slave property, the two nations are locked in a struggle with no easy way out. To conclude on a touch of suitably Victorian melodrama, they are like Holmes and Moriarty clutching each other’s throats at the top of the Reichenbach Falls (download The Final Problem). How long till someone slips? How long till 1848? Or, let’s hope not, 1861?