Trends good for Left, much work to do

It can be depressing to see a week of the government on the ropes and then see polls showing National with an apparently commanding lead. But lets go beyond the shallow analysis offered by the talking heads (‘National’s still well ahead of Labour, nothing to see here’) and look at the trends. They tell a story of a government well past its peak. The question is: can the Left close the remaining gap in time?

The TV1 and TV3 polls are pretty useless because they’re so infrequent that you can’t look at movements month by month and you can’t know if a given poll is an odd-ball out of line with the trends but they both show the same thing as the Roy Morgans – that National/ACT’s support peaked in September/October 2009 and has fallen since. For this graph, I’ve added New Zealand First into the ‘Left’ with Labour and the Greens because it’s clear he can work with them and not with National, and it’s pretty likely they’ll get up over 5% in the end. So, significant falls for the Right and rises for the Left in the past year and a bit. Note the decline in ‘other’, too. That’s the Maori Party and United Future, which is not even registering now. Now, let’s just look at the gap between the two potential governing blocs. 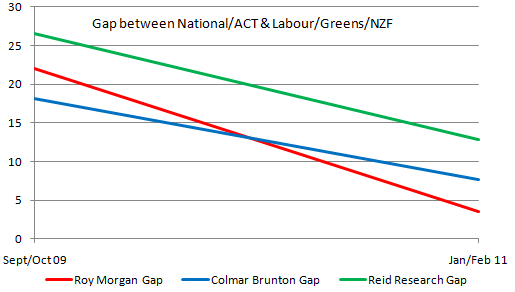 According to all three polls, the gap has more than halved since Sept/Oct 09 – the only difference being how big the gap was in the first place and how much remains. If we were to project these trends to November, the Left could be well ahead of the Right or within about 5% – striking distance.

This is why waiting until November was such a huge mistake. Support will ebb away due to the failing economy, oil prices, public service cuts, asset sales, and the edges coming off Brand Key (he lost 10% of his support as preferred PM in three months according to both the TV1 and TV3 polls). The longer until the election, the more chance Key has of losing.

Key’s best chance remains having 4% or so of the anti-National vote wasted on NZF. That was the reason for Key ruling out working with Winston. He was hoping to break NZF’s resurgence. It seems he failed. In fact, he seems to have galvanised NZF support.

Things are trending the right way for the Left but the rest of the gap won’t close by itself. Its up to the Left, not just the party hierarchies, you and me as well, to make the case for switching from National to a Left party (back to a Left party, for most of the target voters). We need to get something between 2% and 6.5% of voters to move away from National. Labour, the Greens, and NZF will all be making strong cases against cuts and privatisation. These are the two topics they would all be well advised to focus on because clear majorities of voters support their positions.

Now, Rob Salmond decided to have a go at me over my poll posts the other day. I didn’t get to the end of his 2000-odd word treatise but the point was that one shouldn’t try to extrapolate from past polling trends because long-term trends don’t exist. David Farrar linked to the post and said exactly the opposite thing – you can’t draw conclusions from short-term trends. (Trevor Mallard also linked to it, but I couldn’t ascertain his point).

Both Salmond and Farrar are right and they’re both wrong. There clearly are multi-year trends in polls. Typically, a party’s popularity will rise over several years until it gains power, then it will peak in popularity a year or two later and begin a gradual descent – think Labour from the mid-90s through the 2000s, or National’s rise mirroring Labour’s decline from 2002 to 2009, when National’s support peaked. I believe there’s little parties can do about these tides except affect how quickly they go in or out. My projections are simply indicators of where the trends are heading. They are not intended to be predictions of actual numbers. I would note that the Roy Morgans are trending in line with the trend lines I drew months ago.

Of course, during election campaigns, support levels can change rapidly and unpredictably but they change from the levels that the parties go into the campaign with. They can also change rapidly in response to unpopular government policies even when the Opposition is weak – look at Kevin Rudd’s downfall after he announced the mining tax and look at how support for the Conservatives and Lib Dems has plummeted in the UK because of their austerity measures.

Key, so far, has avoided unpopular policies but the cuts are coming and so are asset sales. Both the trend and the campaign ought to come out against the Right this year. When you look beyond the simplistic question ‘is National ahead of Labour?’ to the reality of changing voter preferences between the potential governments, it’s clear that this is going to come down to the wire.

PS. Just saw Farrar’s post on the polls: “Many on the left claimed that [the asset sales policy] would reverse the lead in the polls.” No-one claimed that the lead would flip overnight. We’ve said privatisation will narrow the gap and the gap is narrowing.

80 comments on “Trends good for Left, much work to do ”