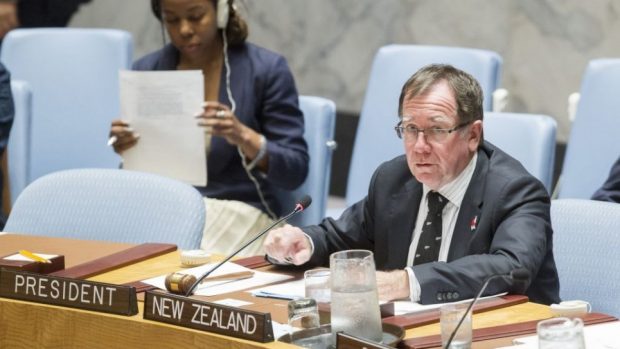 In this year of topsy turvey politics and weird and strange events this is probably one that no one would have seen happening, the Standard praising Murray McCully.

But he deserves it.  He had New Zealand co sponsor a resolution condemning Israel’s continued land grab of Palestinian land and after the United States abstained the resolution passed.

Israel has responded by withdrawing its ambassador from New Zealand.  So long and see you later.

The Israeli Government has recalled its ambassador from New Zealand after the UN Security Council passed a resolution condemning Israel’s continued settlements.

New Zealand co-sponsored the resolution, which said the settlements violate international law and undermine a two-state solution in Israel’s conflict with Palestine.

The resolution was passed 14-0 at the last council meeting of the year, and New Zealand’s last meeting in its two-year term as an elected member of the Security Council.

Loud applause was heard in the packed chamber when the US ambassador, Samantha Power, abstained.

All remaining members of the security council, including Egypt, which had drafted the resolution and had been briefly persuaded by Israel to postpone the vote, voted in support.

Looks like Obama is enjoying his last few days of office doing what is right rather than what the Senate and House of Representatives will put up with.  And it appears from his twitter feed that Trump is fuming.

Egypt was pressured by US President-elect Donald Trump and Israel to delay the resolution. It eventually dropped it but the co-sponsors ploughed ahead with it.

Donald Trump, who takes over as US President on January 20, tweeted yesterday that the outgoing Obama Administration should veto the resolution – but it abstained, allowing it to pass.

The resolution being considered at the United Nations Security Council regarding Israel should be vetoed.

As the United States has long maintained, peace between the Israelis and the Palestinians will only come through direct negotiations between the parties, and not through the imposition of terms by the United Nations.

This puts Israel in a very poor negotiating position and is extremely unfair to all Israelis.

The parties have been negotiating for decades.  And Israel is engaged in a war of attrition on Palestine.  Allowing this to reach its logical conclusion will only mean the complete obliteration of the Palestinian state.

The local right are also not amused.  Cameron Slater has described McCully (Whaleoil link) as “siding with terrorists and terror organisations to try and shaft the only truly democratic nation in the Middle East on behalf of his Muslim paymasters”.  Clearly annexation of land belonging to a foreign nation is acceptable as long as they are muslim.

And David Farrar has in his passive aggressive way complained about how the United Nations “has a terrible bias against Israel and a history of passing resolutions that only call for action by Israel, and nothing from the Palestinians”.  I am not aware of any Palestinian action to resettle its citizens on land belonging to Israel.  Perhaps someone could point out examples to me if this has actually occurred.

But Murray McCully take a bow.  These really are strange times.