What if saving the world meant life was tasty, beautiful and just long enough?

The nasty, brutish and short meme is a failure of imagination.

I often think about why it’s so hard for people to see the value in the Powerdown. If the capitalism-driven climate and ecological crises have the distinct possibility to end human civilisation (this is no longer a fringe theory), and there are solutions that both avert the worst of climate change by mitigation, and at the same time transition us to a resilient society best positioned to weather the storms that are already locked in, why would we not at least consider them?

Why the resistance to even countenance that dropping the excess of our lifestyles might be just the ticket out of this hell?

There are probably lots of answers to that question, but the one that interests me here is the long history of evolution where our ancestors’ ability to improve their lot became hardwired into a creative force that led to bigger brains, walking upright, fire, and farming. Nek minit (in the evolutionary scheme of things), nuclear bombs, the rise and fall of the age of antibiotics, and the fast burn of climate catastrophe.

The antibiotic one is useful to examine, because it illustrates our greatest failing: creative force meets force of hubris meets social and political inertia. We invent a medicine that renders an extraordinary advantage in terms of survivability and quality of life, yet we don’t have the cultural wisdom to protect that advantage for future generations and in a short half century we squander the benefit that should have seen humans through into the future far beyond our current vision. Thanks to overuse in medicine and farming, we are now at the end of the age of antibiotics.

It’s a kind of anti-evolution. And it’s a pattern of collective human behaviour that is repeated in almost every tech advance we make now.

With no limits on our craftiness, we hurl the whole world to the edge of the precipice in multiple ways at the same time. Peak Colonisation. The question remains if we have enough courage, intelligence and imagination to stop short of oblivion. Of course, it’s not that there are no limits, it’s that we are in denial of them. Covid slapped us down a bit, climate and ecology is going to be the really hard hit.

When some of us talk about part of the solution being that we just stop doing so much shit (build less, take less, need less, do less), it seems to upset people. We have some hefty socialisation that says that less = worse, but anyone paying even half attention to the happiest people know that this simply isn’t true. The consumerist cultures of the West have analysed to death the dynamic of consuming not making us happy,

It’s not like we don’t already have alternative tools and pathways. Indigenous peoples retain the cultural practices that the West has lost that build true sustainability into all stratas of human endeavour. Before anyone starts, this is less noble savage and more ‘we fucked up and learnt our lesson early’. But it’s also the difference between cultures that retain the primacy of our relationship with nature as the ground of our being,  and those that see nature as a resource to exploit or somewhere to visit rather than nature being ourselves.

The West hasn’t been devoid of all sense. Among the many useful sustainability techs coming out of the counter culture, permaculture shines as a system of design built on integrating indigenous practice, and science, and translating into a form for the Western mind. Based around a set of sustainability and resiliency ethics and principles (earth care, people care, fair share), and taking its cues from the sustainability in the cycles of the natural world, it offers a set of design tools that can be applied to most problems, and that have been field tested for forty years. 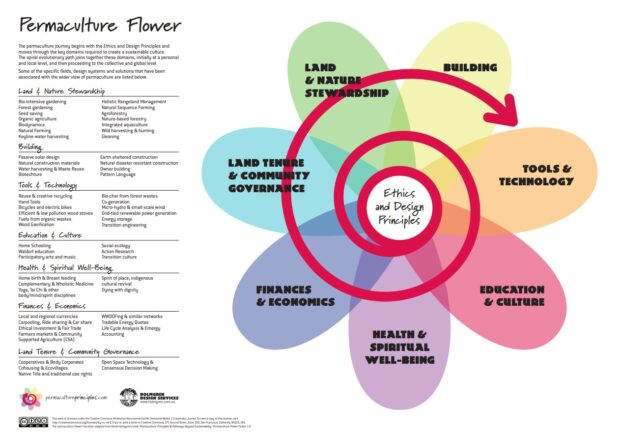 This explanation from permaculture co-originator David Holmgren lays out the both/and, third path approach and neatly subverts the nasty/brutish/short meme, opening the door to the West’s redemption.

That we could take the best out of the 3 great lineages of human cultural evolution. The hunter-gatherer, nomad, minimalist heritage, the long history. The ten thousand years of settled agricultural history. And the 200 years of industrial modernity. And we could take the best out of those things to craft new culture that would inevitably need to relocalise as the reverse of globalisation happened, as the wealth of fossil fuel declined, but that that would create different local cultures that all had a unity in being some new stage in human evolution. Built into permaculture was the idea that yes, some notion of progressive human cultural evolution, but also a reworking, a reawakening of the deep wisdom that lay with our ancestors at a different levels.

Most of the leading edge ‘beyond catastrophe’ movements I am aware of understand that human well-being is instrinsic to saving the world. This means that approaches like the Powerdown inherently include humans being ok too. It’s the third path that takes us out of the false binary of nasty/brutish/short versus green/brown tech death cult futures.

Holmgren has spoken about how our job isn’t to know how to do all the things over the long future to make sure we are ok, but that instead we need to attend to what is in front of us with the full intelligence we have at our disposal. Later generations will figure out the next steps of life beyond uber industrialisation and high tech culture. We just have to make the cultural and political changes that put us on the right path, one protects all of life so that we also may survive and thrive. The issue isn’t whether we can make things right, it’s whether we will in time.

Holmgren’s explanation of what permaculture is here.

22 comments on “What if saving the world meant life was tasty, beautiful and just long enough? ”